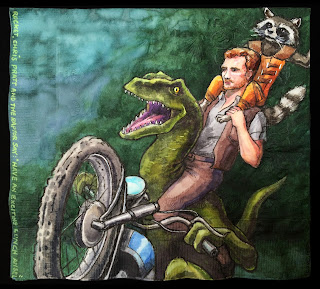 "Guardians of the Jurassic World"

Type Chris Pratt's name into a search engine and invariably images of him posing with an animal will come up. My kids agree, he is clearly a cool guy...but he's even cooler when cuddling with a raccoon or baby dinosaurs. 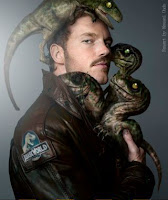 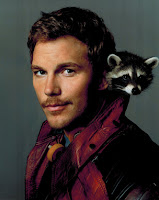 After yesterday's napkin image of a raptor on a motorcycle, adding Mr. Pratt was the next logical step. And once I had added him, it seemed a shame not to include Rocket Raccoon.

No doubt Rocket would have something to say about the folly of genetically modified dinosaurs...they can't even speak English or pilot a space ship, after all. Although he would probably appreciate the capitalist motives of the builders of Jurassic World.

This image was definitely too complicated for me to pull off comfortably. I often feel like a lazy draftsman when I look over the past napkins images.  I tend to avoid drawing full bodies and usually just chose an easy close up of a head or two. In this case, I didn't even deal with the whole motorcycle and raptor, but I still struggled with the orchestration of limbs and bike parts and ran poor Rocket's arm right out of the image. I will happily set my aspirations lower for the moment.
Posted by ninalevy at 2:03 PM