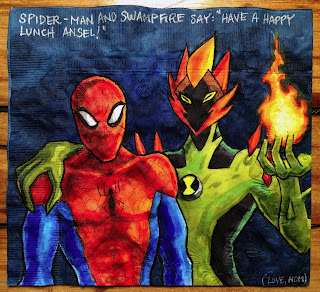 And yet another Ben 10 & Ultimate Spider-Man team-up:

Ansel was not much impressed with this one...

Perhaps Spider-Man does not look heroic-or sarcastic- enough?  I was thinking that he might be a bit nonplussed by the fireball wielding plant alien, but I don't think Ansel wants to see him upstaged at the moment.
Posted by ninalevy at 12:38 PM No comments: 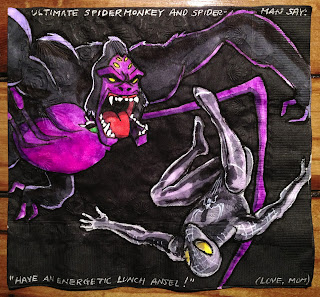 What does the word "Ultimate" mean when it comes to Ben 10 aliens and Spider-Man?

Ansel initially asked for  an "Ultimate Spider-Man" in the style of Ben 10's ultimate aliens:  (bigger and more scary, with shiny armor?)

But after further conversation, it turned out what he really wanted was Spidey in the black suit and Ultimate Spidermonkey.  Although, as he points out, the alien is more like Ultimate SpiderGorilla.
Posted by ninalevy at 10:59 AM No comments: 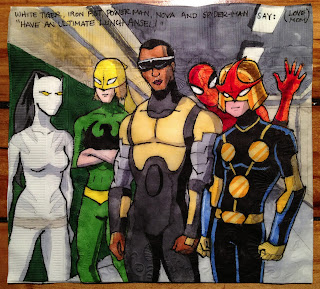 Ansel is quite impressed with the teen super heroes from "Ultimate Spider-Man." Here they pose in their high school hallway with the every sarcastic Spidey.

I am seriously considering reinstating my "no more than one or two characters per napkin" rule. 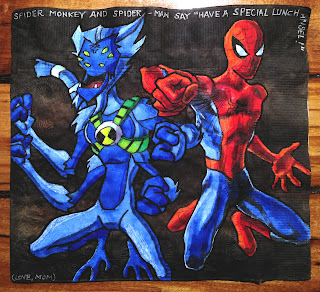 After a long hiatus, the boys rediscovered the coolness of Spider-Man over the weekend.

An Ipad game triggered interest in the character, but watching a couple episodes of  "Ultimate Spider-Man" sealed the deal.  The snarky, slapsticky asides with the manga chibi version of Spidey remind them of the Teen Titans and are endlessly funny to the 9 and 5 year old mind.

Spider-Man was a pretty hot property around here several years ago.  There were many, many Spidey napkins back in the days before I started posting on this blog, and at least two Halloween costumes were purchased.  During the weekend web frenzy, the kids excavated these costumes from the closet, but discovered that they were way too small even for a determined 5 year old.

Archer said the pairing of Spidermonkey with Spider-Man was so obvious, how could we not do it?  Ansel was mostly concerned that my rendition of Spidey was not going to look exactly like the "Ultimate" version.
Posted by ninalevy at 10:04 AM No comments: 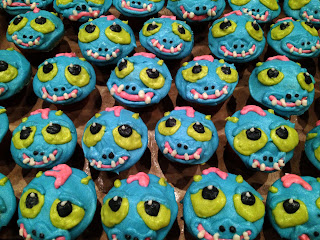 Apparently cupcakes are more challenging for me than napkins.  My assignment was something in the neighborhood of 30 Skylanders Wrecking Ball cupcakes for the observance of our Kindergartener's birthday at school snack time this week.  He was not overly impressed with my application of frosting, pointing out that there was a lot of variation in the facial features.
Posted by ninalevy at 1:12 PM No comments:

The Night Pride from "Lions, Tigers and Bears" 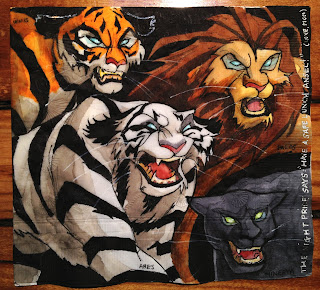 "Lions, Tigers and Bears" by Mike Bullock, Art by Jack Lawrence, is always good for a reread.  The story of stuffed animals who are also fierce animal protector/warriors is unsurprisingly compelling for small boys.
Posted by ninalevy at 10:14 AM No comments: 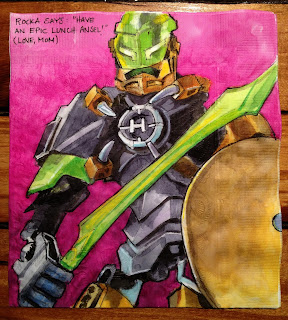 LEGO Hero Factory's new Rocka from the perhaps infelicitously named "Brain Attack" series: Ansel is so looking forward to receiving this one for his birthday that he could overlook the pink background.  I am running low on markers that are suitable for use in a background... and the pink does contrast nicely with the green accessories.
Posted by ninalevy at 9:03 AM No comments: 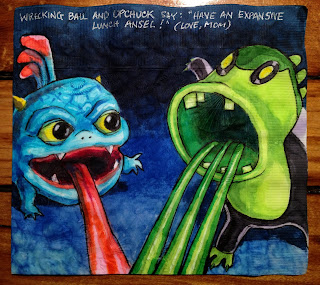 My older son said, "Wrecking Ball and Upchuck! Of course! It's so obvious, why didn't I think of it before?"
Posted by ninalevy at 9:19 AM No comments: 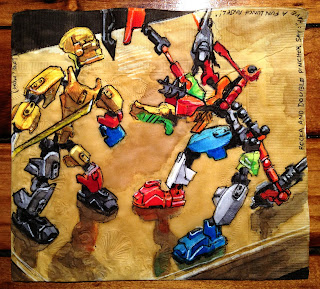 Mercifully, it has been a while since I've had to tangle with the drafting challenge of miscellaneous Hero Factory figures.  I don't think I rose to the challenge on this one.

Some version of Rocka faces off against Ansel's creation: the "Double Pincher" bad guy.  I was not sure if there was a head, or even how many appendages were in play, and as a result, things are pretty unclear on the napkin.
Posted by ninalevy at 9:04 AM No comments: 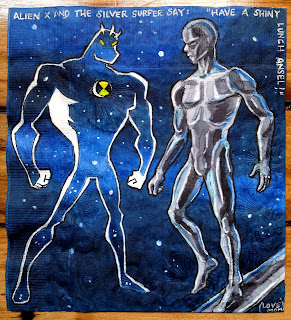 I realized I neglected to upload this image last week.  Ansel tells me it's ok, but he would prefer to see only Alien X.  I agree, my Silver Surfer is rather lame.
Posted by ninalevy at 3:12 PM No comments: 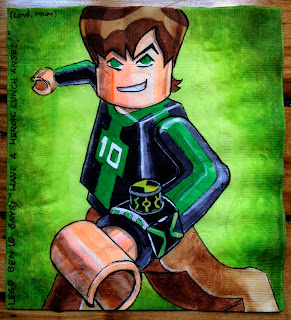 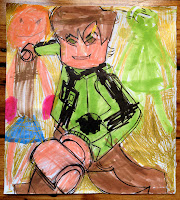 Posted by ninalevy at 3:08 PM No comments: 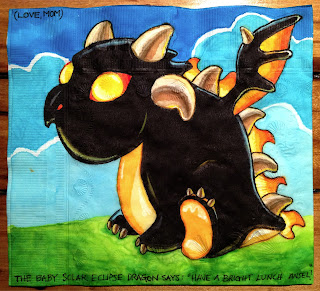 My sons have an ongoing debate about which DragonVale dragon baby is cuter.  I try to remain neutral, despite being repeatedly asked for an opinion.  This is the first DragonVale napkin in a while, but that does not mean that the enthusiasm for the game has flagged.
Posted by ninalevy at 12:31 PM No comments:

Blue Falcon and Dynomutt from Scooby-Doo 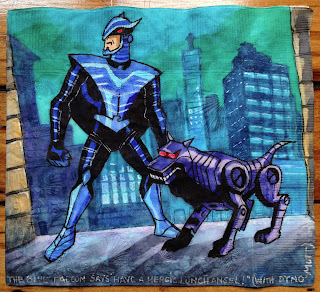 The boys loved the latest iteration of Scooby Doo: "Mask of the Blue Phantom" and cannot wait for it to be released for purchase so they can watch it repeatedly...I did not find it to be as painful as many others in the genre.

Rook and Ahsoka from Ben 10 and The Clone Wars 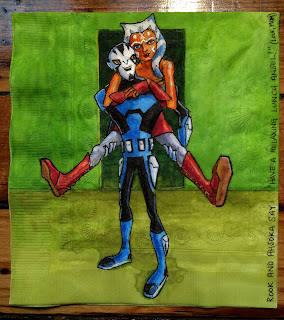 What do sidekicks do on their day off?

While talking about the similarities between the Ben 10 and Star Wars universes, we agreed that Rook was definitely the Ahsoka Tano of Ben 10:  the skinny, new alien sidekick to the human hero with graphic facial marking designed to engage a younger demographic for a franchise reboot.

Ahsoka was formerly quite popular with my younger son, before he received the message from his peer that most girls are uncool.

I'm afraid this napkin was mostly an exercise in parental perversity on my part.  Reminding Ansel that he was formerly interested in Ahsoka and pairing her with Rook resulting in uncomfortable giggling and "that is SO WRONG!"
Posted by ninalevy at 12:03 PM No comments:

Kid Hawkeye from Next Avengers 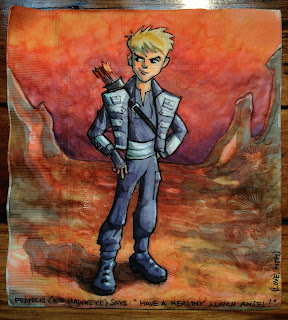 Kid Hawkeye from "Next Avengers": TV indulgence on a school night (because the older child has been stricken with a virus) led to a brief break in our Ben 10 streak.
Posted by ninalevy at 3:59 PM No comments: 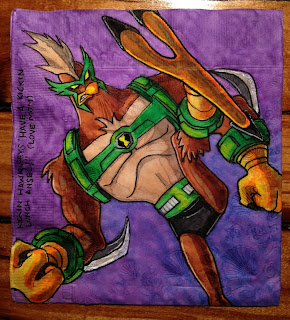 Upstaging perennial favorite Alien X at the last minute this morning: one of the goofier new aliens, Kickin Hawk. Someone at Ben 10 Omniverse definitely has a sense of humor.
Posted by ninalevy at 9:48 AM No comments: 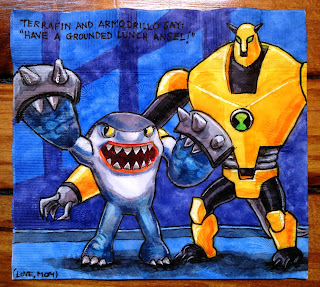 Yet another Ben 10 Skylanders team up: Terrafin and Armodrillo. My sons tell me they are compatible as they both drill underground. I am a bit sketchy on the details.
Posted by ninalevy at 1:43 PM No comments: 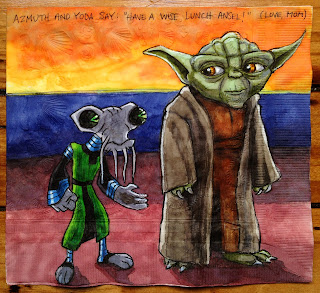 Size matters not:  but small aliens are best suited to advise the young hero....
Yesterday we discussed some of the parallels between the Ben 10 and Star Wars universes:
particularly the trios of Ben/Gwen/Kevin and Luke/Leia/Han and the advisors Azmuth/Grandpa Max and Yoda/Obi Wan.
Our kids are much more interested in the Clone Wars Yoda rather than the Frank Oz version, so the parallel does not really hold as Luke and Leia have not yet been conceived.
Posted by ninalevy at 11:51 AM No comments:

Tree Rex on the Skytrix 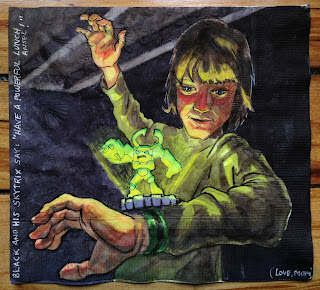 Yesterday our kids requested a mash-up of their present favorite franchises: Ben 10 and Skylanders.  While playing Ben 10 recently, they have added the idea of  a "Skytrix"- a combination of Ben's Omnitrix and a "Portal of Power" which allows the wearer to morph into Skylanders characters as well as Ben's aliens.
Posted by ninalevy at 12:25 PM No comments: 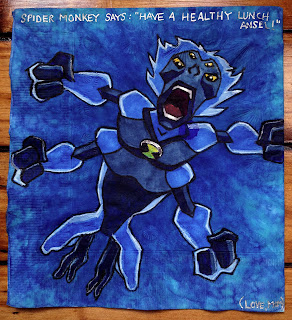 Our 5 year old's recovery from a bout of stomach flu led to an unbelievably long Ben 10 marathon over the weekend...all seasons of Alien Force & Ultimate Alien.

Posted by ninalevy at 1:54 PM No comments: 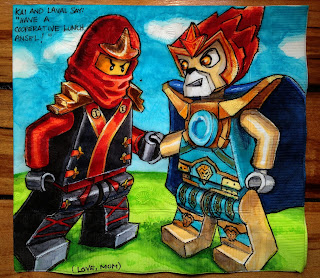 Ninjago's Kai hands off the Wednesday night LEGO TV show timeslot to Legends of Chima's Laval: The kids are up for a new series, but I must admit that I am daunted by the idea of bonding with a new program (and the demands for new toys)
Posted by ninalevy at 12:39 PM No comments: 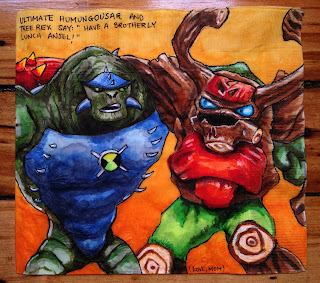 The boys are very interested in the combination of the Ben 10 and Skylanders character universes.  Not only can they can turn themselves into Ben 10's aliens courtesy of the Omnitrix- apparently they also have a "Skytrix" which allows them to select Skylanders monsters also.
Posted by ninalevy at 11:47 AM No comments: 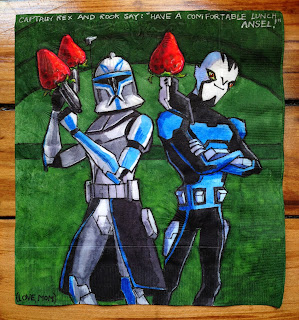 Rex and Rook: guys in blue armor with desirable weapons. Strawberries are out of season, but I'm still using them for ineffective weapon pacification.
Posted by ninalevy at 9:54 AM No comments: 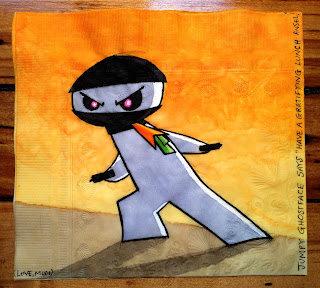 Hero 108 is suddenly back in style with our younger son.
He requested Jumpy Ghostface with his rabbit ears ninja mask.
I left the jump rope off out of sheer laziness.
Posted by ninalevy at 1:25 PM No comments: