Mechagodzilla and Ultraman from "Ready Player One" 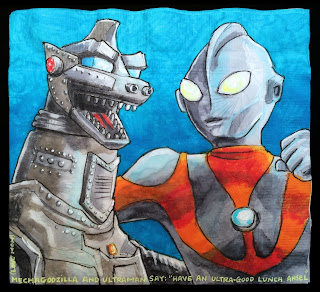 We've been working our way through Ernest Cline's "Ready Player One" at bedtime over the last couple of weeks.

The story of a teenager who spends all his time playing video games in a virtual universe and eventually triumphs in both the game and the real world is hugely appealing to my gaming obsessed sons. It is definitely not a book written for children, although it might well be most gratifying for people who are still enjoying their 1980's childhood.

I've had to do a bit of editing during the reading, with varying success. We listened to some of the novel during a car trip, playing Wil Wheaton's reading for Audible because I cannot read in the car without projectile vomiting. Unfortunately, we listened to the section where the protagonist encounters another character whose avatar is named "HotCock007."  Needless to say, this and some other instances where I have neglected to filter out all profanity have only made my sons love the book more.

And, one of the last scenes features an epic battle between Mechagodzilla, "Godzilla's robotic doppelganger"  and Ultraman, another colossus from a 1966 Japanese television show.

Inappropriate language and Mechagodzilla: what could be better than that?
Posted by ninalevy at 12:28 PM