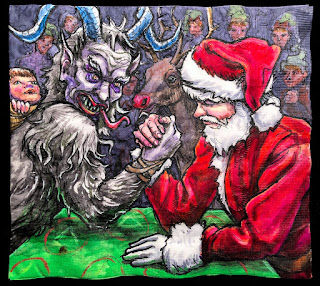 Merry Christmas from Krampus and Santa:

Once one has seen the Krampus costume options out there, it is hard to maintain interest in boring old Saint Nick.

Even if one has very deserving children who have been good all year....
Posted by ninalevy at 10:22 PM No comments: 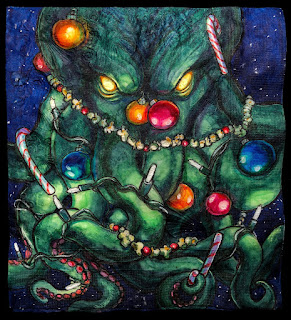 Perhaps our alien overlord is dreaming of a white Christmas?

One can never disappoint around here with a Cthulhu drawing...except maybe if one drapes him with poorly drawn strings of popcorn.
Posted by ninalevy at 10:08 PM No comments: 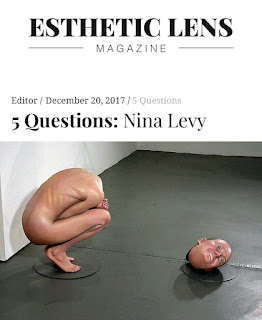 The very nice online arts and culture magazine Esthetic Lens included me in their 5 questions section with some pictures of my sculpture.

I said some mildly embarrassing things which might not improve your opinion of me.

But you really should follow the link and look at the other articles. 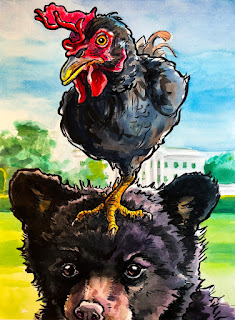 Jonathan Edwards the bear with the unnamed one legged rooster:

Theodore Roosevelt had the most pets of any American President, including this bear and fowl.

There were other pet bears, and other poultry, in the Roosevelt household (as well as a badger, a lizard, and many other creatures) But these two seemed to stand out for me.

But I never pass up an excuse to draw poultry.
Posted by ninalevy at 9:36 PM No comments: 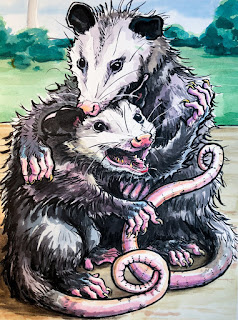 Two of Benjamin Harrison’s more unusual pets during his term in the White House.

Did you know: Opossums are North America’s only marsupial. They are naturally immune to rabies and the bites of pit vipers. They have opposable thumbs...on their hind feet, so perhaps that makes them opposable toes.

Not sure they make good pets for presidents or regular folk.

This drawing is not one of my better efforts compositionally speaking, but I like the opossum concept. They are a nice combination of cat, giant rat, and raccoon qualities.

Maybe nice is not the right adjective.

(Trump has remained petless so far. Perhaps he needs some appropriately named opossums?)
Posted by ninalevy at 9:21 PM No comments: 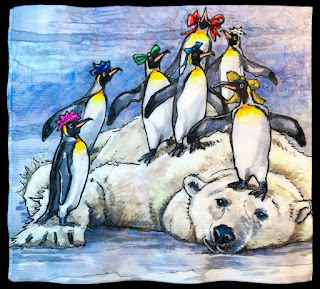 Non Denominational Winter Holiday Image...that no one at my house wanted to use as a holiday card:

I was trying to come up with a Happy Holidays image that wasn’t too Christmasy.

Unbelievably, tomorrow is the younger kid’s last day of school before the winter break, so I felt like I had to take a stab at the holiday card idea. No one was impressed....even though, coincidentally that younger kid is reading “Mr. Popper’s Penguins” for Language Arts class.

And yes, I know that penguins and polar bears reside on opposite sides of the planet.

But maybe they get together when they have time off from work over winter break?
Posted by ninalevy at 9:56 PM No comments:

Max and the Grinch Light it up 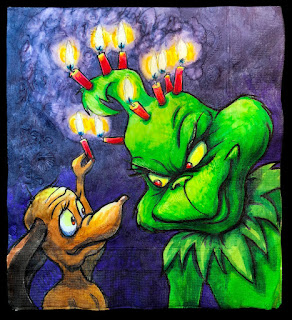 My kids are not very much fans of the Grinch. He is more my reference point.

But I feel like we’ve all been a little grinchy lately, so I thought I should not exclude the green guy from the Festival of Lights.

And pyromania is really the driving force behind my kids’ interest in the menorah, so a little unsafe fire handling seemed appropriate as well.

And Max the dog was always a highlight, but one didn’t get the sense that he would stand in the way of setting something inappropriate on fire.
Posted by ninalevy at 10:50 PM No comments: 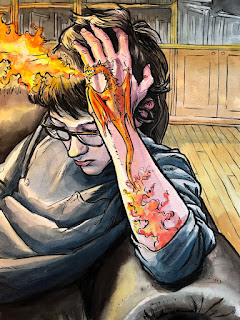 The Boy With The Dragon Tattoo:
(Or The Ballpoint Pen Doodle)

As a parent, I cannot say that I respond with overwhelming enthusiasm when my son returns home from school, clearly having spent a good chunk of time doodling on some part of his body or clothing during a class.

But I try to fight the tendency to become solely the upholder of rules and the critic of disorder in my son’s life. There is some much petty crap to carp about: the homework that is not done, the teeth that are not brushed, the pumpkin pie that is smeared on the couch, the pen scribbled all over the pants....

So I tried to shift my thinking about the self doodling by redrawing his hand dragon.
He told me that my drawing had made it more cool. This was high praise indeed, but I will try not to be overwhelmed. There is still food smeared on the couch and I am not sure I can do much to shift my thinking on that front.

(Yes, this is yet another holdover from the #inktober series, Hideous Progeny, fantasy portraits of my kids...and it is a watercolor, and sadly, not a napkin)

The original hand art: (His dragon drawing is more interesting than mine, but there is no opportunity for flames) 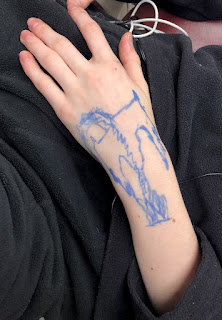 Posted by ninalevy at 9:57 PM No comments:

Email ThisBlogThis!Share to TwitterShare to FacebookShare to Pinterest
Labels: 2017-18, Family, Fantasy Portraits of Kids, Hideous Progeny, Not a Napkin, Watercolor 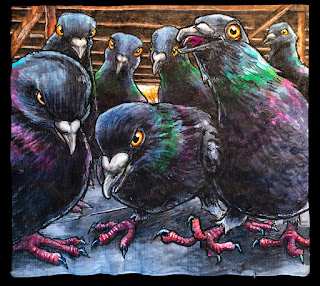 Pigeons have been on our minds lately.

We watched “Death Peck,” a recent episode of Disney’s “Star vs the Forces of Evil,” where a misunderstanding between humans and “the Pigeon Kingdom” leads to the pigeons trying to enforce “death by a thousand pecks.” There was also the implied threat of weaponized droppings.

But we were already thinking about pigeons anyway.

Our daily walk to the subway passes under an elevated portion of the Brooklyn Queens Expressway. This area under the roadway has no doubt always a welcoming habitat for pigeons, but I can’t say that I really paid close attention until the last couple of years.

In that time, a neighbor lady who lives quite close to the BQE has developed a serious pigeon support hobby.  It might be classified as quite a bit more than a hobby, actually. We pass her and her rather significant breakfasting flock as we rush to the subway at 7:10...or more often, ten minutes late at 7:20.

Depending on our timing, she is either energetically scraping pigeon guano off the sidewalk, or laying out what looks to be several pounds of birdseed on the freshly scraped areas....or if we are really late, she is presiding over a huge feasting flock of fowls.

Recently, one of my kids focused on the health implications of walking through the droppings every day....and depending on our timing, the sartorial implications of placing ourselves under hundreds of potential droppers.

He now insists that we go out of our way and cross the street to avoid the pigeon convention and its waste.

While I am not a big fan of the idea of being shat upon myself, I have to admit that I do think back a little bit fondly of the time before when we were on better terms with the pigeons and their human benefactor. She seems offended by our obvious avoidance of her flock.

But luckily, the pigeons don’t seem to care.
Posted by ninalevy at 9:53 PM 2 comments: