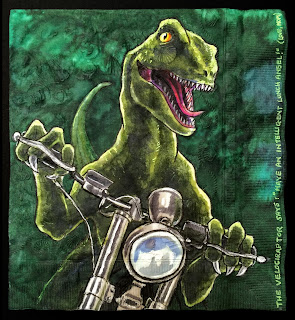 Last night I needed a napkin idea that would be easy to execute quickly.  I was thinking about maybe something with dinosaurs as the impending release of the next Jurassic Park movie is still a hot topic with the kids.

Idly googling the words"velociraptor" and "jurassic world" at 11 pm, I stumbled across the sublimely weird  "Jurassic World" trailer parody by Darren Wallace where the raptors ride motorcycles alongside Chris Pratt.....

On the way to school, the kids and I discussed the idea of raptors riding with Star Lord. My older son told me that the obvious follow-up would have to be Chris Pratt riding on a dinosaur riding a motorcycle.

I guess I'll see what I can do about that tonight.
Posted by ninalevy at 2:10 PM