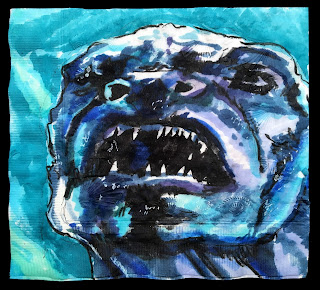 Batman V Superman was available on pay per view. So, we had to watch it again.

This was another napkin produced very quickly in the morning  before camp. Not being able to get 4 or 5 hours of sleep at night any more is really cramping my style.
Posted by ninalevy at 11:52 AM No comments: 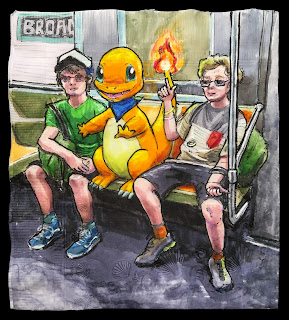 Pokemon: Unsafe at any speed underground in NYC

We somehow managed to dodge it for a while, but Pokemon Go obsession has finally seized our older son.  The younger one is not all that interested in the game itself, but is amenable to reigniting the general obsession with things Pokemon. Thus we have the two napkins picturing each of the kids' favorite Pokemon of the moment. The younger requested Charmander, and the older, Wigglytuff.

I inserted them into our morning subway commute to summer camp.

The MTA is clearly concerned about the safety of people playing the game in the subway. As am I of course. While a game that actually encourages our older child to put his pants on and leave the house is not a thing to be scoffed at, I am worried about his inattention to the surrounding real world.  Below is the MTA poster telling commuters to not fall onto the tracks while trying to catch Pikachu.... or maybe not to try to save Pikachu from a certain and horrible death by subway train....

These napkins were rather casually executed, Due to health issues, my staying up late privileges have been permanently suspended, probably permanently. I pretty much have to go to bed at the same time as my kids, minus some hurried lunch packing and laundry doing. A two napkin evening is definitely a thing of the past, so I had a hard time finishing these two in the morning while we were trying to get out the door for camp. 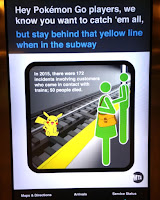 Posted by ninalevy at 6:02 PM No comments:

Wigglytuff at the Metropolitan Stop 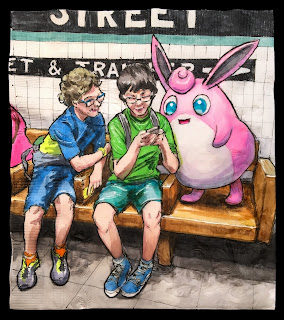 Posted by ninalevy at 2:08 PM No comments: 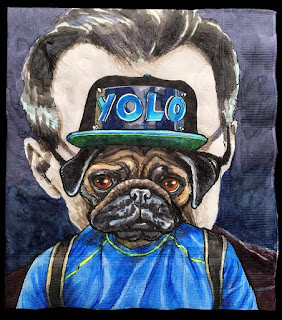 YAOYO: You're only young once.
But you can always be a Pug.

There is a yearly summer event in our Brooklyn neighborhood called the Giglio Feast in honor of Our Lady of Mount Carmel. The celebration hails from a small town in Italy where most of the area's original inhabitant emigrated from. (Now they have been replaced by hipsters with parents wealthy enough to cosign their condominium mortgages.)

The Feast includes engaging cultural elements like an enormous saint-encrusted totem which is danced down the street on the shoulders of a crowd of red hatted Italian men.

Let me be honest, just in case it is not already clear. I don't like the carnival aspect of the Feast for many of the obvious reasons. My most significant gripe, however, is that I really do not enjoy my interactions with the carnival workers (is the term "carnie" considered derogatory? Or am I confusing it with other "y"/"ie" ending slangy descriptions of people?)

The endless shouting at "Mommy"  to throw money away on my children's behalf somehow bothers me more than it should. Not to mention the intense pressuring that is rolled out should we actually stop in front of any game to consider it.

But, let me wrap this up quickly as you are certainly wondering what this has to do with a pug wearing a hat... Suffice it to say that the problem was easily solved this year, possibly never to return.

I decided that the kids were definitely old enough to manage their own currency this time. I made this assessment despite the fact that they are not good in crowds and are also remarkably poor at holding onto paper money in a discrete fashion. I thought it likely that the cash would be taken off of them before they even had a chance to spend it, but decided it was well worth the risk.

On the way over, I handed them each some bills and explained they could spend it however they wished, but that there would be no more forthcoming.

Actually holding the money themselves instantly sucked all of the joy out of the carnival for them. Suddenly, they concluded that the food and the rides were overpriced, and that the games were a waste of money because they were fixed.

Of course, I had been making this argument for years, but had been unpersuasive when the money seemed to be coming out of (to their minds) a potentially endless fount in mom's backpack.

They did each play the try to toss the ball into a bucket game once because the supposed prize was a PlayStation 4 and that was too entrancing to completely bypass. Mysteriously, it was ever so easy to put the ball in the bucket during the "demonstration throw" but then totally impossible to keep it from bouncing back out when they were playing for the actual prize. In the past, they never believed me when I told them that this game in particular was obviously fixed. But this year, they were convinced after spending only $5.

And the game operators were much less obnoxious about trying to take money directly away from children, so the whole experience was much less stressful for me.

Less fun for the kids of course.

But I feel I've done my job as a parent when I've managed to suck the joy out of something for my kids. Just kidding.

They did not, however, take the remaining cash home and put it into their college fund. They pooled their remaining bills and bought the silly "YOLO" hat ("you only live once"- if that needs explanation) for the younger kid.

On the way to camp wearing the hat, he posed in front of the Christian Slater poster on the subway platform. It seemed like a napkin worthy juxtaposition....as long as his face was replaced by that of a pug.
Posted by ninalevy at 6:04 PM No comments:

Rowan and Slimer from "Ghostbusters 2016" with Strawberries for Lunch 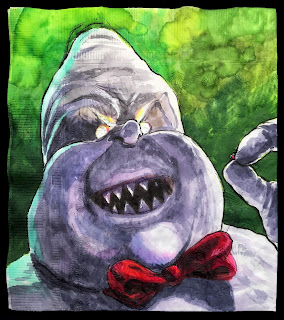 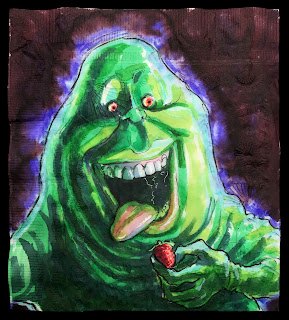 We've clearly been seeing too many movies lately as I have been subjected to the latest "Ice Age" trailer three times now. Each viewing is made more unbearable by the knowledge that soon I will actually have to sit through the movie itself.

Albeit the antics of Ray Romano the wooly mammoth were pleasant compared to the totally over the top abusive trailer for the horror movie "Lights Out." It managed to be patently obvious and horribly terrifying at the same time. I dread dealing with the kids and their brand new fear of the dark at bedtime later tonight. I guess the people who paired that trailer with a 1pm Sunday show of "Ghostbusters" were thinking that there weren't going to be any kids in the audience? There were many who were considerably younger than mine.

"Ghostbusters" itself was, as my older son judged, "surprisingly not crappy." While not outrageously fantastic, it was pleasant to watch adult women being funny, and I would certainly rather watch it five times than sit through an "Ice Age" sequel once... Not that I will get to choose.

My sons didn't make the Chris Helmsworth is Thor connection until the credit sequence.

Snowball from "The Secret Life of Pets" 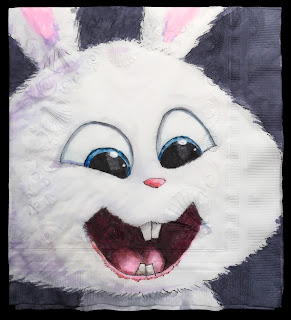 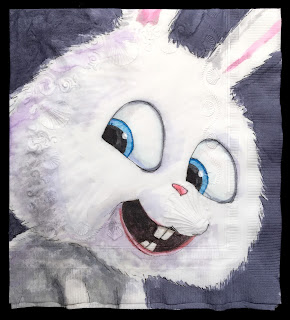 It seemed unlikely that we could miss seeing "The Secret Life of Pets" in a theater. But then, the kids had not wanted to see "Zootopia." Both movies feature cute bunny characters.

Of course the cute bunny in "The Secret Life of Pets" voiced by Kevin Hart is a loopy, over the top, homicidal criminal, while the "Zootopia" bunny is a mild mannered police officer. It is not hard to discern why our sons were more interested in "Pets"

After seeing the movie last weekend, my older son did offer the criticism that it would have been much improved if the crazy bunny had been able to swear. Perhaps the same could be said of Louis CK's character as well.
Posted by ninalevy at 12:57 PM No comments: 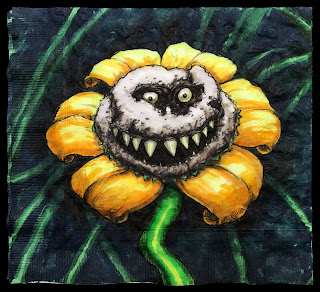 "I'll kill everything you love to eat for lunch"

One kid had a Sans napkin, so the other needed Flowey.
Flowey starts out as a rather ingratiating flower with a face and later morphs into a more horrific form, particularly if you cross him. The line in the game is "I'll kill everyone you love."
Not sure how he does that without arms.
Posted by ninalevy at 12:21 PM No comments: 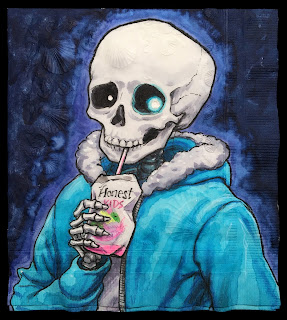 For the record, our younger son prefers the grape flavor.
He was annoyed that I drew the pink lemonade.
Posted by ninalevy at 6:06 PM No comments: 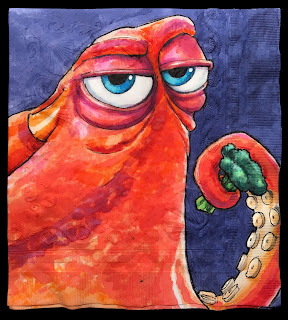 In a moment of Holiday Weekend Desperation, we went to see "Finding Dory."

One child was adamantly opposed to seeing the movie for mostly irrational reasons.  The other child, usually philosophically opposed to the viewing of movies in theaters in general (and against leaving the Xbox for any reason) was strongly in favor, mostly because he knew that his brother really didn't want to go.

We did not manage to depart for the local theater until about the time the movie was purportedly supposed to begin, therefore embarking on a 12 minute walk full of recrimination and complaint. Remarkably enough, we made it in time to see the movie start even after large tubs of popcorn and high fructose corn syrup beverages had been purchased. We did miss the previews and the Pixar short. I was sorry about that.

Everyone agreed that the movie was pretty good, and that Hank the octopus was a high point.

Sadly, there was no actual broccoli in this particular lunch. There were strawberries, but I did not think a berry would look as nice with Hank's skin tone.

As I'm sure have already mentioned several times before, our kids are secretly enthusiastic broccoli eaters, but they prefer not to reveal this shameful fact in the public arena of a school or camp lunch.

I am in the process of giving up on packing them lunch items that I think they should eat in the mostly vain hope that they might eat them...even though I am pretty sure that they won't eat them. As one son is thirteen now and his nine year old brother seems to be an honorary adolescent just by association, pretty much whatever I am pushing is a lost cause just because I am pushing it.

At this point, I have begun to fear that too much broccoli in the lunch will drive them to a lifetime of nothing but cheesecake and salt and vinegar potato chips just to spite me.
Posted by ninalevy at 4:16 PM No comments: 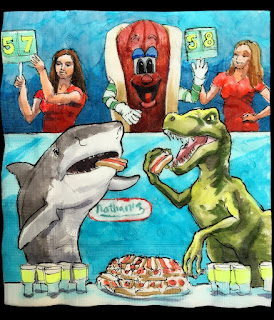 It's still #SharkWeek for us.....& always #DinosaurWeek
Posted by ninalevy at 7:24 PM No comments: 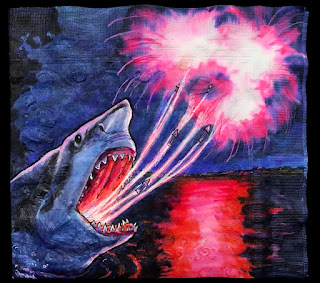 It may not still be #sharkweek2016 technically, but I guess it's kind of always Shark Week around here.
Posted by ninalevy at 10:35 AM No comments:

Sharks vs Puppies for Shark Week 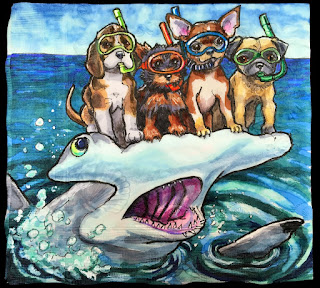 Sharks vs. Puppies: Who Will Prevail?

(Moving beyond the Discovery Channel's "Sharks vs. Dolphins")

Our kids are very impressed with Shark Week. Of course they are always impressed with television programming that is broadcast after their bedtime.
Posted by ninalevy at 8:47 PM No comments: