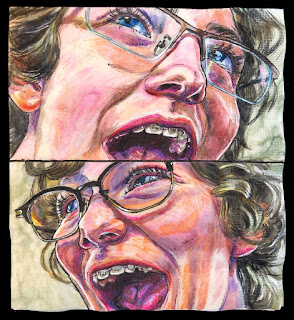 This one is perhaps not so much a meme, strictly speaking, as an observation.

My impression is that there is a lot of yelling going on in anime and anime-derived games.
Related memes often present the characters with their mouths almost comically open wide.

There is also a lot of yelling at my house.

My sons are often yelling happily or excitedly while playing such games.

When I am doing the yelling, it is very rarely an expression of joy or excitement.

The second image is a “My Hero Academia” derived meme...I think....and the source of the image format. 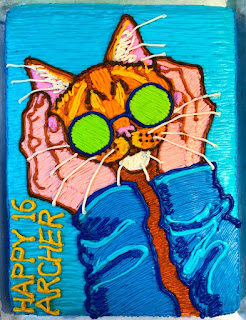 We have a long history of silly frosted birthday cakes....but perhaps, like the napkins, we are dwindling down to the end times.

The sixteen years-ancient birthday celebrant was flummoxed as to what to select for his cake image this year.

Somehow at the very last minute, we arrived at the cute-beheld-spectacled cat image for the Sixteenth.

I can’t explain it’s significance, but I can only observe that it says something to him.

He’s not much into cats, real or imaginary, so that’s definitely not the answer to the mystery.

At any rate, it was an easier frosting project than, say a particular Dark Souls character wearing a certain kind of armor, sitting in front of a bonfire, or three characters from Skylanders, or the Predator riding on Godzilla, just to name a few.

I have included the original image for reference. I did change the glasses from black to acid green because, while looking cool, black frosting can be a bummer to eat and to clean off the couch after the 14 teenagers have left.

I apologize that the original cat image is uncredited. We don’t know where it came from, and Google has been unforthcoming. If you know, please do share.

Someone once contacted me to ask if they could reproduce our napkin of Princess Leia riding a Tyrannosaurus Rex in the frosting of a birthday cake for their four year old daughter...to which of course I said: absolutely!

So certainly we like to give credit where credit is due... though of course I don’t feel the need to be credited for the birthday cakes of small children. But it was amusing to be asked for permission. Sorry, again, I do not have an image of the cake handy. 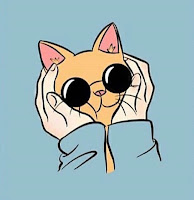 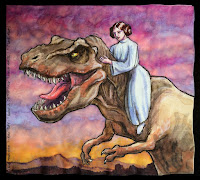 Posted by ninalevy at 9:09 PM No comments: 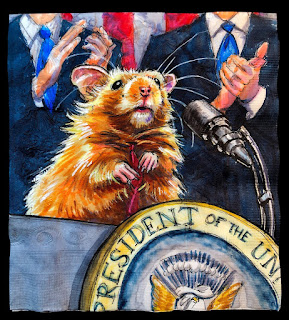 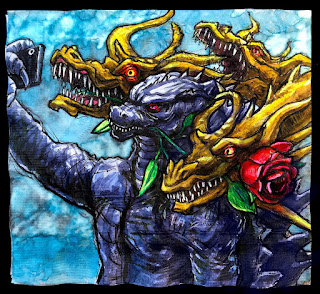 Sadly, my staying up late to finish a drawing privileges have been revoked, probably permanently. Once I miss the deadline of the actual holiday, I look at the thing and say something like, “why can’t I even manage to indicate clearly which monster is in front of the other monster?” Then the motivation to display my awkward drawing declines further. Clearly, I was fooling myself about how fun it was going to be to draw all those heads with horns jutting out of them.

But my kids are looking forward to the next Godzilla movie. (Featuring King Ghidora, the three headed gold dragon creature, just in case that needs to be said)

And I am always happy to attempt a peaceful-resolution-between-kaiju sort of image as we could use more of that sort of friendliness between our resident monsters.

(You can see some of our long napkin history of Godzilla posing with other large monsters at the Godzilla section.)

Posted by ninalevy at 3:41 PM No comments: 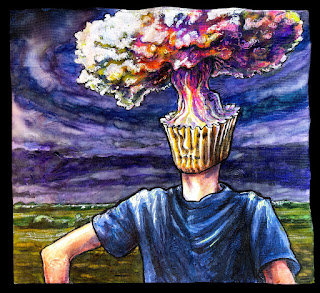 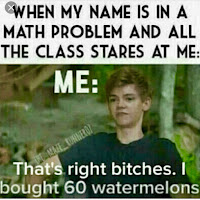 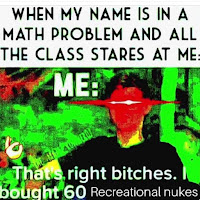 I initially thought that generating a series of napkins based on memes (and my misunderstanding of them) would not be much of a challenge. We are constantly awash in memes after all.

But my triple criteria: a topic somewhat recognizable to many people (totally subjective and impossible to define, I know), a meme specifically relevant to us and our family, and finally, something that I want to draw.... well, this is presenting more of a challenge than I had hoped.

Memes are best when they have multiple layers and references.

The first iteration of the “My Name in a Math Problem” with the image of Newt from “The Maze Runner,” is amusing. Particularly if you find any use of the word “bitches” to be a knee slapper.

But to segue back to the “Bitches” topic: I apologize sincerely if my use of the word here is offending or irritating.  I am more or less among the irritated and offended....if only my resistance hadn’t been ground down to an accepting nub. The draining away of the offensiveness of the word makes me uneasily contemplate what sorts of other appalling things I might come to accept in the future?

At any rate, if you are not a current parent of a lower or middle schooler, the questionable use of kids’ names in school math problems is definitely a thing, and the quantified item is often food and somehow ridiculous.

In our case, the item of food that was recently consumed in ridiculous quantities was cupcakes. I made an obscene quantity of mini cupcakes for one kid to take to school for birthday acknowledgement....and an almost obscene amount came back home in the box to join the significant amount still at home in the fridge. Though not for long.

And cupcakes and recreational nukes have so much in common. I’m going to assume I don’t have to expand on that observation.

As for this napkin: often a drawing reaches a point where one has to make a choice: do I leave it suggestively unresolved and semi-finished? Or do I push it farther, risking ruining it completely in the process? In my pretentious professorial capacity, I would tell an art student that often you have to take the risk, push it farther and turn it into a total piece of crap,  if only for the learning experience.

I can only hope that this drawing was in fact a successful learning experience. 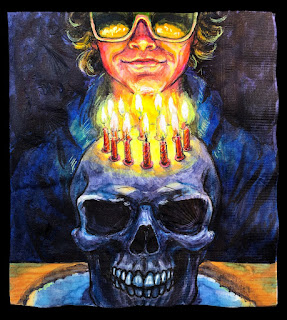 This might be the first child birthday in a long time that I haven’t been called upon to produce a large frosted sheet cake.

(Last week I did make over one hundred mini cupcakes with blue frosting...just in case you are worried that I am slacking...)

Very early on, before the kids knew better, we substituted healthier foods than cake with butter frosting and artificial dyes to accompany birthday celebrations. This was before I found my calling as a spreader of colored frosting.

The kids often wanted some dark image in their frosting: Batman, Dark Souls characters, and lots of black frosting was always something I regretted later.

But now perhaps the younger child is too cool for a mother-decorated cake.

So as long as I was imagining a fantasy birthday cake, I though it should be hypothetically cool-enough, complete with death, fire and  black frosting.

Though, now I have a supply of activated charcoal, so perhaps I could make a slightly less toxic and staining version of black icing if someone wanted such a thing.

The glasses he is wearing in the image say “IT’S MY BIRTHDAY” above the lenses.

Also, totally not cool enough even for napkins.

You can see some of the previous frosting efforts at:
https://ninaslevy.blogspot.com/search/label/Frosting?m=1
Posted by ninalevy at 3:46 PM 1 comment: 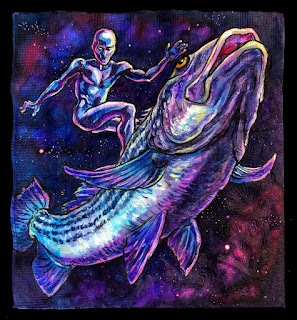 Or, My Color Palette From 1979 Makes a Strange Return Appearance:

I only have the barest sense of what speaks to my husband about the Silver Surfer character, but I am entirely certain it is not the ability to reflect pink and purple.

But while I was flipping through some old comic Surfer images, reflections of purple, magenta and the like were not uncommon. Yes, more tasteful highlights of blue and grey are more frequent, but somehow I was diverted into reliving my preadolescent aesthetic.

I was in sixth grade when “The Silver Surfer : The Ultimate Cosmic Experience” originally was released....not that the one thing has anything to do with the other.

My apologies to my spouse. Pink and purple is not his thing now, and I am fairly certain that he would not have appreciated my purple jacket, turquoise cowboy boots and magenta leg warmer ensemble back in 1978 either.

Posted by ninalevy at 2:33 PM No comments: 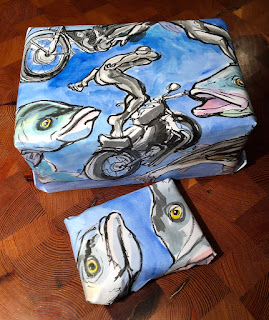 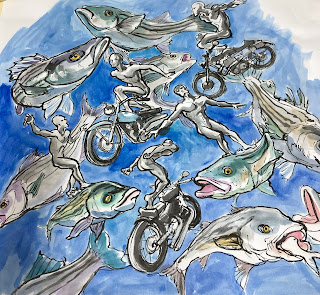 Because no one in the family should be exempt from my half assed opportunity to do some fast crappy, drawing with the excuse in mind that I am going to cut it up and tape it to some boxes.

Not unlike the napkins, the three subject matters here are not things I know much about.  The gift recipient, of course, has infinitely more knowledge.

It became clear during the execution, that what I really wanted to draw most was the fish.

I think the small package was the biggest success, at least as far as the wrapping went. The contents, probably not so much.

I think I still might have an unresolved urge to draw the Silver Surfer riding a silvery fish (striped bass anyway) so maybe there is a napkin iteration coming.

Posted by ninalevy at 2:24 PM No comments: