Alien, Raptor and Unicorn do the Michigan Rag 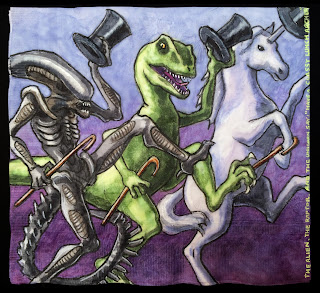 I'm going to be drawing two napkins a night next week when the kids start summer camp. I am not sure how this is going to go, as I'm way out of practice with that sort of volume.

Since my sons are in the same program and will be eating lunch together, I suggested that perhaps there would be one napkin a day, alternating between the two of them. Their response could be described as a bit agitated. The older one argued that it wouldn't be fair because he hadn't been getting any napkin drawings during school and really had to have them for camp. The younger one argued that he was used to getting them in school and couldn't possibly go without them for camp.

Ok. Well, I guess they must still appreciate the napkins a little.

I thought I would try and make a few before camp begins.  However, such advance planning rarely works out well for me.  Asking what they want ahead of time just means the kids' requests get much complicated. For instance: "I want the Alien, a Velociraptor and a Unicorn dancing like the "Hello My Baby" frog with top hats and canes."

The kids have been singing this "Hello My Baby" song frequently when they want to pull out all the stops and be extra annoying. But somehow I had not made the connection between this grating behavior and the classic Warner Bros cartoon featuring Michigan J Frog.

Perhaps the singing frog cartoon is not fresh in your mind either... particularly if you are not the mother of small boys prone to loudly performing the song while jumping on their bed clad only in underpants more than an hour after they should have been asleep. 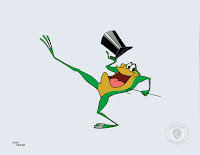