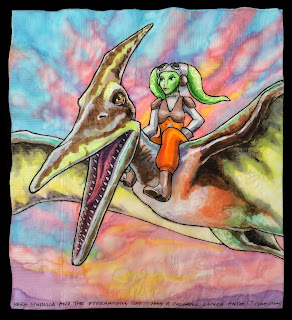 I have not been following "Star Wars Rebels," the latest animated Star Wars TV show, very carefully. Hera Syndulla is one of the band of rebels, and I think, the captain and pilot of their ship. She is a Twi'lek,  one of the humanoid, but not human, species in the Star Wars universe. This means, (fun facts that I just learned on the "Wookiepedia" today) that parts of her brain are located in her "head-tails" and that her eyebrows are tatooed on.

I felt I had been shirking the color possibilities of the dinosaurs in the series so far, making them all an amorphous grey/green. Of course, no one knows for sure what sort of coloring would be accurate....

The color scheme definitely got away from me on this one.  The greyish green solution looks pretty good in retrospect.
Posted by ninalevy at 1:26 PM