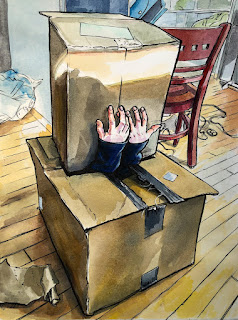 The cliche that small children always enjoy the box that a gift came in more than the gift itself was certainly true here.

Now that the kid is no longer so small, there might be something more strange going on. (No gifts involved.)
Posted by ninalevy at 9:22 PM No comments:

Email ThisBlogThis!Share to TwitterShare to FacebookShare to Pinterest
Labels: 2017-18, Cardboard, Family, Hideous Progeny, Not a Napkin, Portraits of Kids, Watercolor 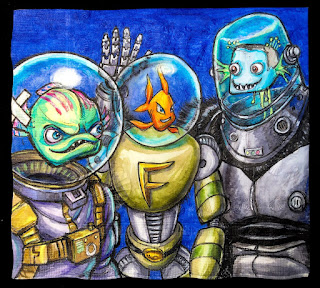 (They hate it when you tap on the glass)

Recently, the Leviathan skin in Fortnite was of great interest to our older son, (that’s Levianthan on the left) But unfortunately, he did not have the funds to purchase the fish head for gameplay.

Leviathan was purportedly inspired by Minion from the 2011 DreamWorks movie Megamind. (That’s the one with the gorilla suit on the right)

But Leviathan also reminded us of Fish from “Fish N Chips” a comic by Steve Hamaker, unsurprisingly, the one in the middle.

And there was also Fish, a character from “Chicken Little” a rather misguided effort from Disney back in 2005. Our older son was absolutely fixated on “Chicken Little” around age three, and in a Stockholm Syndrome sort of situation, after endless viewing, I learned to love it also. And it has Fish, who is based on the children’s book “Fish Out of Water” (also obsessed over here at our house many years ago). Fish wears a sort of reverse diving helmet/bowl on his head. His pal and classmate, Chicken Little reminds their friends: “They hate it when you tap on the glass” (I may still have all of the movie’s dialogue memorized)

But, sad to say, that Fish did not have a cool robot body, so he is excluded here, despite being the likely source of our affection for fishy persons wearing helmet bowls.
Posted by ninalevy at 10:24 PM No comments: 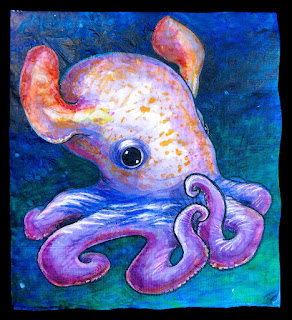 The subject of our younger son’s science report last week. I think there was a Power Point involved.

After five minutes of googling, I gather that there are 13 species within this genus of “pelagic umbrella octopuses” who vary in appearance, but all have the Dumboish fins/ears.

And, yes, apparently it is “Octopuses” and not “Octopi”...a word I have been mispluralizing for my entire life. Octopus is not Latin in origin, but rather Greek. Which would make it “Octopodes” in the plural. But the standard English plural is -“puses”

Or so I just read.

My son is not terribly interested in this plural debate.

And he told me I made the Dumbo unrealistically colorful, which is a definite possibility.
Posted by ninalevy at 6:51 PM No comments: 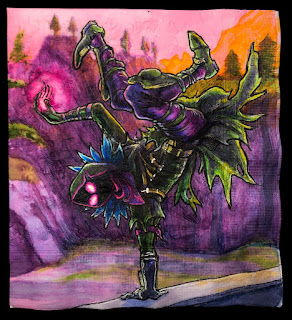 Raven from Epic Games’ Fortnite busts a move on a Tilted Tower:

There’s been a lot of Fortnite around here lately. The skins (playable character appearances) are amusing and quite good at extracting allowance funds from adolescent boys. Last week, both kids were desperate  to have Raven for the remarkably steep price of $20. I still have trouble getting my mind around the concept of the purchasing of virtual appearances within a limited virtual world....but clearly this is a very lucrative business model.

Though now that I have drawn Raven, my kids have moved on and are no longer even slightly interested.
Posted by ninalevy at 4:59 PM No comments: 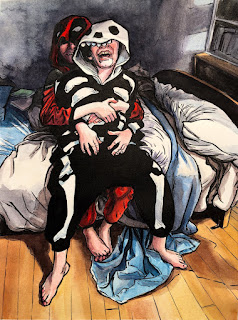 When you are a saucy, parent-taunting adolescent, somehow, there is nothing so gratifying as dancing around in an infantalizing fleece suit long after your aggravated parents have insisted you should go to bed.

Our older son previously derived an immeasurable amount of pleasure from refusing to take off his Deadpool onesie for days on end. I’m not convinced that the plastic fleece was really all that comfortable, but it sure irritated his father.

The skeleton onesie did not inspire quite so much devotion/irritation, but it was definitely good for a joint party of twerking and parent tweaking.
Posted by ninalevy at 8:28 PM No comments: 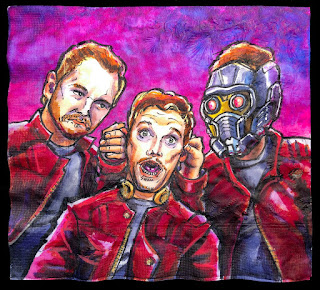 I neglected to post this one in a timely fashion:

The Easter Bunny, incredibly overindulgent holiday character that he (or she) is, hid Funko Pop minis inside some of the plastic eggs found in our living room Easter morning....(Along with those organic jelly beans than no one really likes since the bunny takes direction from the kids’ killjoy of a mother)

Unfortunately, given the nature of blind boxes, 3 out of the 4 Guardians of the Galaxy boxes were occupied by Star Lords.

Which made me think of The Three Stooges... my apologies to Chris Pratt.
Posted by ninalevy at 12:10 PM No comments: 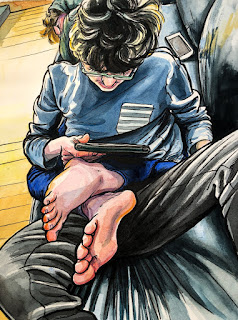 There is not so much physical togetherness going on now in the hardcore throes of adolescence. But there used to be much more. I can’t reveal too much here without inspiring embarrassed hostility from my kids. (The very  idea of indulging in cute cuddling with ones annoying brother, even in the dim dark days beyond recall...just not  cool, Mom.)

But, when it does happen, I enjoy seeing instances of physical proximity that might even border on affection....

And I always enjoy an opportunity to draw something that might visually suggest physical malformation...
Posted by ninalevy at 12:06 PM No comments:

Email ThisBlogThis!Share to TwitterShare to FacebookShare to Pinterest
Labels: 2017-18, Family, Hideous Progeny, Not a Napkin, Not Trademarked, Watercolor 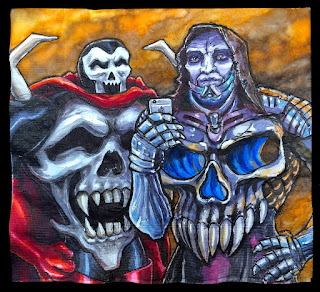 Skull Brothers:
“Who Wore it Better?”
Or, “Separated at Birth?”

I-r0k, played by TJ Miller in the recent movie version of Ready Player One strangely has much in common with General Ogun from Jason T Kruse’s “World of Quest”

Like “Quest,” Ernest Cline’s original novel was one of our younger son’s favorite reads...  Even though I-r0k is a rather minor character and I don’t remember anything about what he was wearing....

Really, one can never go wrong with a skull body.

Posted by ninalevy at 9:43 PM No comments: