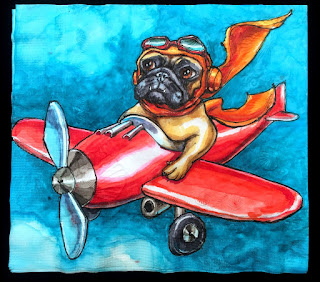 My Pug Pilot looks rather morose and does not convey my sons' intense appreciation for the "Shooty Skies" game. 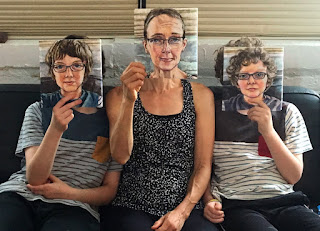 Still need to work on this one a bit.
It's been a very difficult summer.
Can you tell?
Posted by ninalevy at 8:27 PM 2 comments:

Email ThisBlogThis!Share to TwitterShare to FacebookShare to Pinterest
Labels: Family, Napkins Portraits in the Real World, Not Trademarked, Portraits of Kids, Selfie 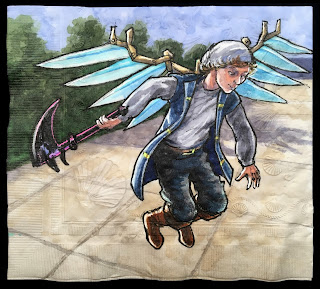 Posted by ninalevy at 2:56 PM No comments: 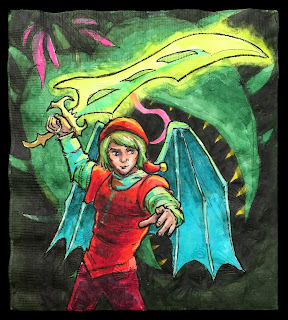 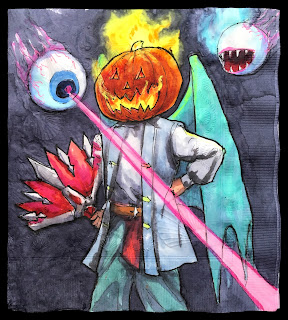 I have been quite remiss about posting napkins this summer. There have been fewer new ones of course, as we have been working off of the backlog from the school year. And, I have been busy obsessing about my health, the kids'  health and about food.  This is all probably a story for another day and another venue.

But I am going to try to post a few that have gone undigitized over the last month or so.

These two were specific requests that I draw "realistic" versions of the kids' personal avatars in the game Terraria.  Terraria is a fairly low detail, 8 bit sort of game, visually speaking.  While the bosses, NPCs and other characters and costumes are many and creatively conceived and named, there is not a lot of realistic detail available.

Unfortunately, I don't have pictures of these two avatars from the game itself... but suffice it to say, I exercised a good bit of creative license.  These two napkins HAD to be completed simultaneously, as, OBVIOUSLY, one kids could not take an avatar napkin to camp while the other kid went without... so these were drawn in perhaps one third the time that I might usually spend on a napkin, so they are what they are...
Posted by ninalevy at 2:44 PM No comments: 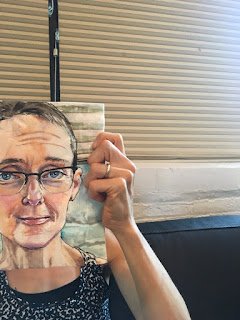 I usually try to do napkin portraits of myself and the kids sometime near the end of the summer.
This set isn't going so well so far. I find my facial expression on this one somewhat troubling.

I asked my younger son to help me line things up and take a snapshot of the thing in progress.

It did not occur to him that my napkin face should be anywhere near the center of the frame.

Upon further reflection, and given my demeanor on the drawing, I think his sense of composition was perfect.
Posted by ninalevy at 6:10 PM No comments: