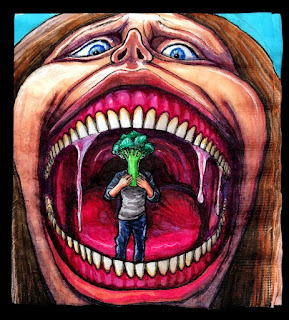 Balanced Lunch for Titans:
A well fed American child with a side of broccoli.

Our younger son would very much like to go to the Universal Studios park in Osaka and feed himself to a Titan.

Sadly, there is no "Attack on Titan" area in the Universal Park here in the US.
Posted by ninalevy at 5:58 PM No comments: 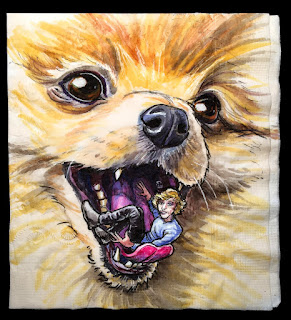 Kong (@kongdasavage) only has 712,000 followers on Instagram. He has a bit of work ahead of him to catch up to fellow Pomeranian JiffPom (@jiffpom) who has 5.1 million.
Posted by ninalevy at 9:17 PM No comments: 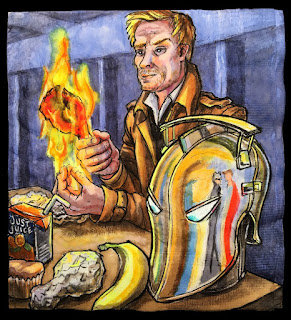 We watched the DC animated movie "Justice League Dark" and now our younger son is very interested in the John Constantine character.  He has not seen the recent TV show, nor the previous Keanu Reeves movie, but I fear it will be hard to avoid both.

Doctor Fate is also cool at our house lately, probably courtesy of the impending release of Injustice 2.

When I Google "Constantine and Doctor Fate" I get results that suggest some sort of appearance of Doctor Fate's helmet on the Constantine show.  I did not pursue the specifics.

Googling does not reveal the existence of a lunchbox in the shape of Doctor Fate's Helmet, however.

Surely this must be a temporary oversight.
Posted by ninalevy at 5:51 PM No comments: 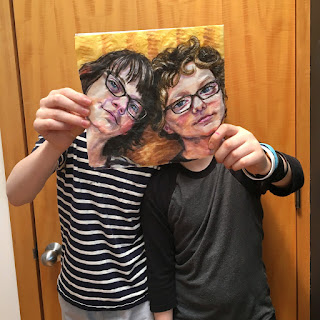 As usual, my rather pathetic offering for a significant day is a napkin for my mother.

My kids gave me the gift of letting me sleep in today...
They slept in later than I did, so it was not a high effort gift.
But once awake and reminded that today was Mother's Day, they were quick to assert that it still counts as a gift that no one woke me up early.

I did not wake my mother up early this morning either.
No doubt she was grateful. 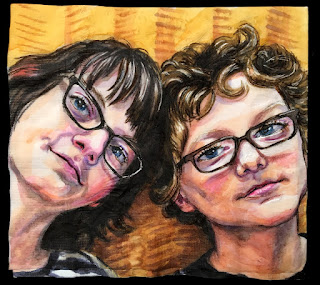 Posted by ninalevy at 2:31 PM No comments: 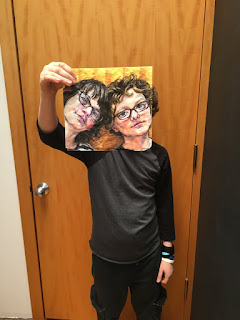 The older brother was unable to join us for this iteration as he was engaged in super important online activities at the time.

But I find I almost prefer this picture of the napkin with the younger sibling with his second, superego-like head.

Big brother is always there in spirit if not in the flesh.
Posted by ninalevy at 2:24 PM No comments:

Email ThisBlogThis!Share to TwitterShare to FacebookShare to Pinterest
Labels: 2016-17, Family, Napkins Portraits in the Real World, Portraits of Kids

Bears at Home on the Couch 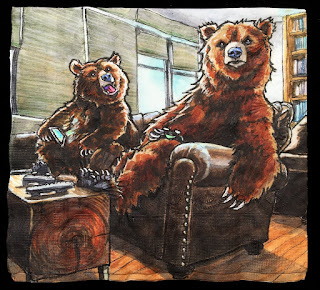 Sometimes the bear is your bro:

"Real Friends" is the semi autobiographical story of a middle schooler's fraught relationships with her friends at school and her volatile older sister who is sometimes portrayed as a giant bear.

Which brings us to the question of which sibling is the Grizzly at our house?

My vote is:
Both.
Obviously.
Posted by ninalevy at 2:12 PM No comments: 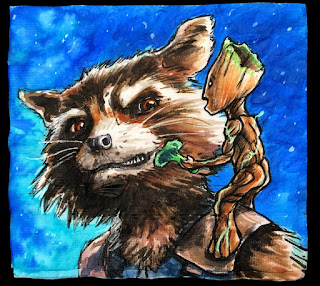 But trash pandas might not like broccoli.
Groot offers some greens to Rocket Raccoon for lunch. ‬ ‪

Yes, of course my kids liked the new Guardians of the Galaxy movie‬.
Posted by ninalevy at 9:04 PM No comments:

Kirby Fox at the Skate Park 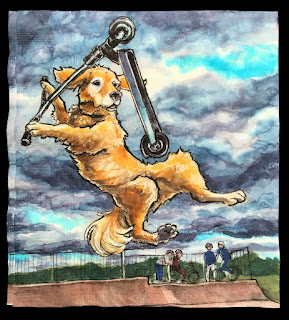 His 13 year old golden retriever, Kirby is not necessarily known for his scooter prowess (although he does have 410,000 followers on Instagram)
...but we can imagine what goes on behind the scenes.

This is another napkin in our series of internet famous dogs for my dog deprived son.

Who should be next?
Posted by ninalevy at 6:34 PM No comments: