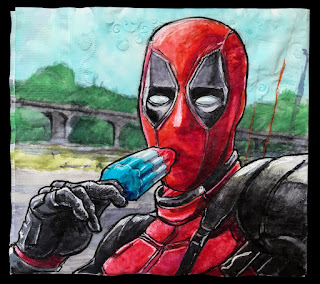 Unfortunately there is no fresh napkin for this year’s observance of this important holiday, so we are revisiting some from days past.

Deadpool was sucking food coloring through his mask back in 2017.
The Minions were offering a treat to Thanos the same year.
....And then to a Tyrannosaurus in 2015.
The Velociraptors date from last summer, but they are out of chronological order because I forgot about them.
And the Predator and Alien were celebrating the Fourth of July with Uncle Sam way back in 2013.

Our kids aren’t much interested in Bomb Pops these days.

It’s hard to eat one in front of the PlayStation.

You can see all the past Bomb Pop posts here 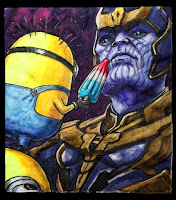 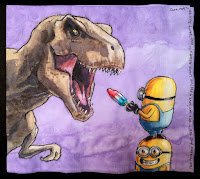 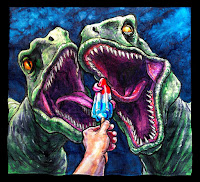 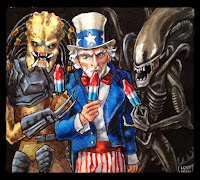 Posted by ninalevy at 4:56 PM No comments: 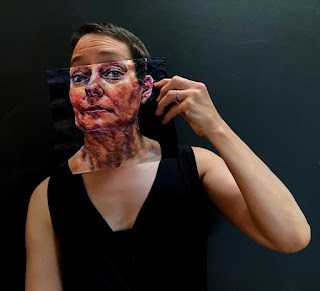 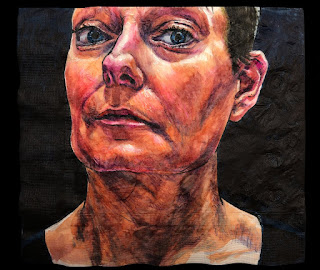 There hadn’t been a napkin selfie for a while.

Today I felt like maybe my eyebrows were the most relevant part of my real face.

(Somehow forgot that lumpy napkins don’t look good when lit from above... perhaps the same is true for me)

You can see the previous selfies at:
https://ninaslevy.blogspot.com/search/label/Selfie?m=1
Posted by ninalevy at 6:23 PM No comments: 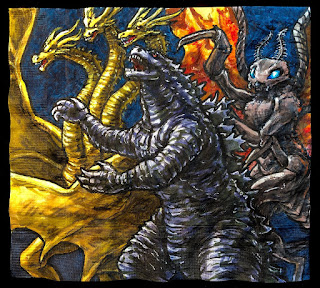 Ok, so I did have to ask my kids to explain the “Baby Shark Challenge” phenomena to me. I had somehow missed out on the international, egregious ear-worm that is the Baby Shark song.

You are now either shocked by my amazing ignorance, or don’t know what the hell I am talking about (hi Grandma!).

I suspect most who are still reading (besides my aforementioned, endlessly indulgent mother) can’t stand to slog through my explanation of the Baby Shark juggernaut.

But the bare facts according to Wikipedia:
(Everyone else just skip past the bullet points if you haven’t already stopped reading)

* The point of origin was maybe a campfire song with no particular author, but the song usually had colorful verses including dismemberment by shark, attempted CPR, death and the meeting of Jesus.

* Pink Fong released a child friendly version on @YouTube kids on November 25, 2015 and, “as of May 2019 this version has garnered over 2.8 billion views on YouTube, while all videos related to Pinkfong's song approach 5 billion views, making it the most-viewed educational video phenomenon of all time” (“educational”?)

* “Due to its popularity, this version of the song has spurred an online dance craze (sometimes referred to as Baby Shark Challenge) cited as ‘the next big thing after the domination of Gangnam Style’”

When debating which characters to draw making the Baby Shark Challenge dance moves, it seemed inevitable to me that it had to be giant monsters.  The most popular giant monsters of the moment are of course those in the recent Godzilla: King of the Monsters movie.

My son, Kaiju fan that he is, told me this drawing was ok... but that if I revealed the Baby Shark theme, we would immediately lose a lot of followers.
But I am afraid, that almost 10,000 departed Instagram followers later, (yes, we were once at 29,000 plus on that platform) it’s too late for me to start strategizing about social media popularity now.
Posted by ninalevy at 4:25 PM No comments: