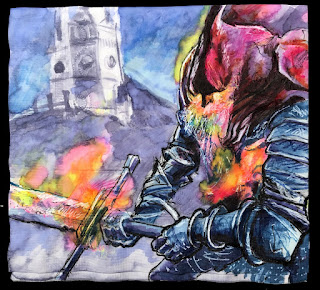 It's been spring break for our son, so we saw a good deal of this guy at our house.

This napkin was a rather haphazard effort...as...well...it has been spring break, and I have been busy feeding and cleaning up after the spring breakers. They were engaged in important labors...like defeating Slave Knight Gael.

I have to admit I am looking forward to the resumption of school.

Posted by ninalevy at 9:06 PM No comments:

Proposed Sidekicks for Doctor Who in Season 10 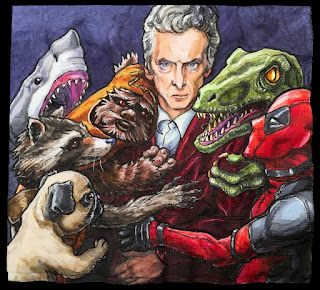 Yes, I know that they have already announced who the co stars will be for Peter Capaldi's last season. We even saw the Christmas special.

This napkin post is rather delayed, I am afraid. We had the conversation about who should replace the dear departed Clara quite a while ago. The kids both thought that a new sidekick should be someone other than another young attractive Caucasian woman, but could not agree on what sort of person should be next. I have assembled a cast of their favorites as potential companions.

Doctor Who is not really on our sons' minds right now, but as the tenth season is coming up soon, I thought perhaps it was time to post this one.

My younger son was happy to point out some of the many drawing failings on this one. Deadpool is too small,  the pug in the foreground is awkwardly posed. And, he would like to add that pugs aren't necessarily his favorite dogs right this now.

This napkin is definitely more about quantity rather than quality. Back when I was drawing two napkins a night, I used to have a rule about no more than two characters at a time. It made a lot of sense.

Posted by ninalevy at 4:43 PM No comments: 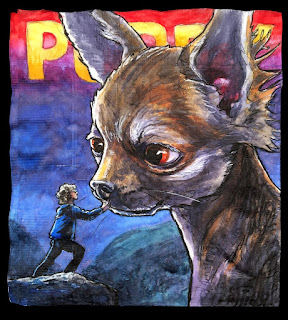 Were you aware that today is National Puppy Day?

And if one consults the National Day Registry website, one can discover the life-improving information that March 23rd is also National Chip and Dip Day, and National Near Miss Day (something to do with an asteroid that passed within 500,000 miles of the earth in a previous year)

And my personal favorite: it is National Melba Toast Day.

I seriously considered drawing a puppy sitting on an asteroid, dipping a piece of Melba Toast into a bowl of dip. But instead, I took the easy way out and copied a Skull Island movie poster, replacing King Kong with a rather creepy young Chihuahua.

Because a puppy, or at least the lack of a puppy for our younger son, is a monstrously large topic at our house.

For the record, our son is very much against Chihuahuas, and no doubt particularly against ugly Chihuahuas like the one I have incompetently drawn here. Perhaps I felt the perverse need to enlarge a very small dog.

....and if by some bizarre twist of fate, we are ever able to acquire a dog, I am afraid it would have to be "a punter" as I can't imagine that we could handle a large, furry one. Thus I always feel the need to lobby for small dog acceptance.

P.S. That says "PUPPY" up there instead of "KONG" if that needs to be pointed out. 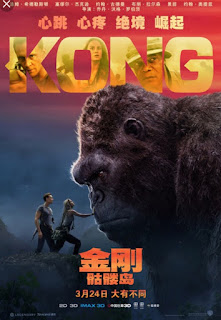 Posted by ninalevy at 5:17 PM No comments: 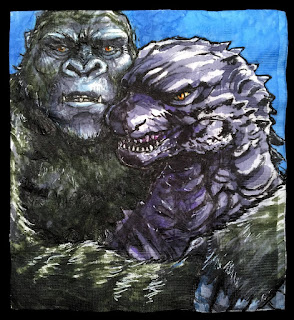 Would King Kong and Godzilla be able to see eye to eye?
After watching "Skull Island," we want to know.

There's clearly been a good bit of inflation since the first Kong movie in 1933 and the first Godzilla outing in 1954. According to Wikipedia, Kong started out somewhere in the 18-24 foot range, although director Merian C. Cooper originally envisioned him at 40-50 feet. His latest incarnation in "Skull Island" which, yes of course, we had to see, seems to be somewhere in the neighborhood of  80-100 feet.

The first Godzilla was around 160 feet tall, so he could just peer over the 1950's Tokyo skyline. The 2014 version was closer to 350 feet so as to compete with contemporary skyscrapers.

There is Internet chatter about the two meeting up in a movie sometime in the future....if their size disparity could be reconciled.

As you can see, I did not worry overmuch about the relative size question. I was too busy trying to handle the "which of the many versions of each am I drawing?

A previous Kong/Godzilla encounter
where they seem to be equally, if awkwardly, matched:

Posted by ninalevy at 8:27 PM No comments: 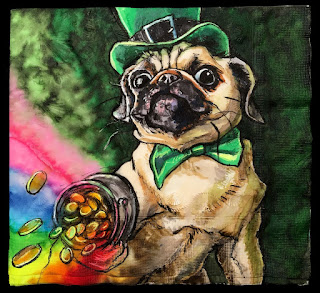 My kids tell me the dog should have been holding a gun as well as a pot of gold.
‪
Posted by ninalevy at 7:01 PM No comments: 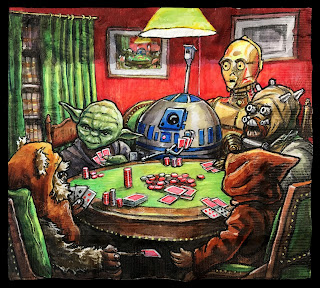 ‪"The fear of loss (in poker) leads to the dark side."
...or don't try to cheat Yoda...unless, perhaps, you are a poker playing dog.

I thought about updating the "Dogs Playing Poker" background to something more spaceship appropriate...or maybe Tatooine-appropriate... But decided to go with the classic red and green pseudo club-decor.

The "Dogs Playing Poker" painting was actually a whole series of paintings produced by one artist over a period of years around 1894-1907 for an advertising campaign for a cigar company. Or so says Wikipedia. This image is a bit of a combination of three of them.

My younger son was the one who suggested the poker game. He now tells me that the drawing did not live up to his expectations. He thought that R2D2 and "Chopper" the contrary droid from "Star Wars Rebels," should have been the ones passing cards in the foreground, as they both have extendible arms.


a couple of the paintings:

Posted by ninalevy at 3:54 PM No comments: 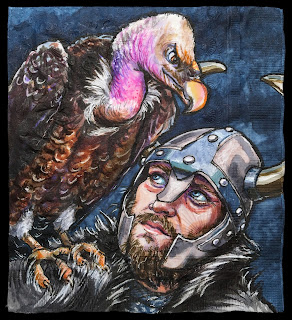 Vikings are the mascot of my younger son's school.
He wrote a report on Vultures last week.

Are these facts excuse enough for this image?
Probably not.
Without a doubt, I just wanted to draw a vulture...and a viking with a fun hat.

I asked my son to share an interesting vulture fact. He offered that they can be cannibals

I think we can do better than that: Apparently vultures urinate are on their own feet and legs, perhaps to cool off and to kill any bacteria or parasites they have picked up from carrion.

...or from unwashed Vikings. 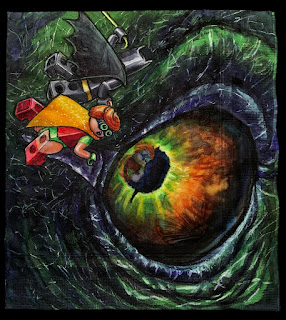 Yes, we had to see both The LEGO Batman Movie and The Great Wall.

‪My son and  I disagree on who would have the upper hand‬....and which movie was better....although he loved both.

He proclaimed the story of the mutant lizard swarm attacking Matt Damon and ancient China as the better of the two movies. No accounting for taste, even in one's own offspring. Probably the less I say about The Great Wall, the better. But it was not altogether unpleasant. And the lizard attackers, while bizarre and unconvincing, were ok because they were not really scary for 10 year old viewers...or at least not for my ten year old viewer. It is possible that my son might be more jaded than the average 10 year old American boy when it comes to movie monsters, but I don't think that is entirely the case.

It was mildly interesting that the Taotie lizards are very vaguely related to a real concept in Chinese historical iconography. Matt Damon not so much.

I can however, unreservedly recommend the LEGO Batman movie  for those who are invested in LEGO and/or Batman because of personal interest, or because they are closely related to people who are.

Email ThisBlogThis!Share to TwitterShare to FacebookShare to Pinterest
Labels: 2016-17, Movies 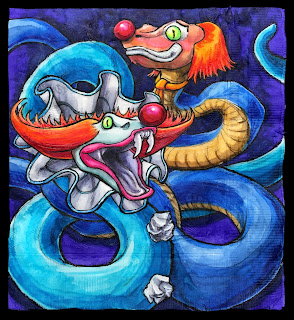 It was of course inevitable that we would see the Batman LEGO movie. I was surprised that we were able to wait a couple weeks to do so. My younger son and I did have an opportunity to see it earlier, but his older brother forbade us to see it without him. (So the younger brother and I had to go see "The Great Wall" instead. More on that later...if I have the fortitude)

Lego Batman is definitely worth seeing if you have had excessive exposure to all things Batman and Lego. It has a fine sense of humar about the Venn diagram intersection between the two fandoms: Adult Fans of LEGO meets Underage Fans of The Dark Knight. The movie is full of jokes both for people young enough to play with plastic bricks and people old enough to remember that "The Condiment King" was a real DC villain. That said, my kids, DC connoisseurs that they are, were already aware of Condiment King, but they seem to have aged out of actually playing with their collection of 10,000 Legos.

One of their favorite moments in the movie was the scene where Alfred tells Bat/Bruce that he has to overcome his worst fear. Bruce shoots back, "Snakes??!!" Then, "Clowns??!!" And finally, "Snake Clowns!!!" Alfred is talking about the fear of being part of a family again, but Batman retorts, "No, it's Snake clowns! And it's your fault for putting that idea in my mind!"

My rendition of snake clowns was not particularly successful, probably overly influenced by my uncomfortable childhood relationship with Bozo the Clown on TV...but perhaps they are a little bit more frightening than the LEGO version?

If you haven't seen the movie yet, you can watch the video clip where Batman reveals that his greatest fear is snake clowns, and that it is all Alfred's fault 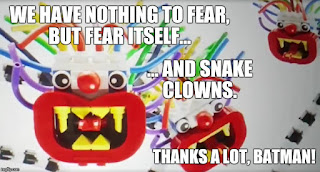 Posted by ninalevy at 1:56 PM No comments: 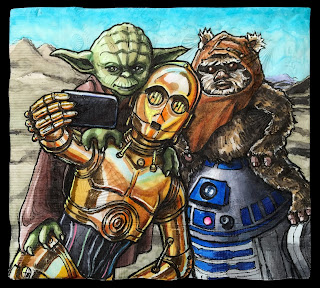 Group selfie of the short of stature held up by the metallic:

This particular group of characters was requested by a non relative looking for a picture for a three year old Star Wars fan.

My younger son and I discussed what would Yoda, C3PO, and an Ewok be doing if they were together? His suggestion was that they should all be playing poker like the dogs in the well known "Dogs Playing Poker" painting.  He was familiar with it because we had a napkin a couple of years ago that brought up the idea of that painting.

While I agreed that was definitely a potentially funny scenario- (is the Ewok cheating with extra cards? Or is R2 using his extension arm to hold the cards?) Poker seemed maybe not the right fit for the those under 5.

Recently, the group selfie has become my lazy fall-back explanation for any grouping of characters.

My son tells me I still need to draw his poker game idea with Yoda, Wicket and the two droids.
Posted by ninalevy at 1:37 PM No comments: