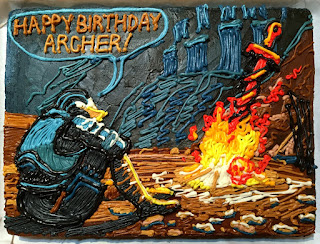 My younger son was disappointed that my frosting application was, shall we say, a bit more "expressionistic" on his older brother's birthday cake. "I can hardly tell that is a knight!" he complained.

Dark frosting is not generally not a good thing. And even the "No taste" red frosting tastes pretty bad. Therefore, I was not optimistic about the "knight sitting by the Dark Souls bonfire" request for this cake which would necessitate both blackish and reddish frosting.

I compromised by "crumb coating" the cake in white and then skim coating a thin layer of lip-staining dark blue, brown and grey over the top. I used as little red as possible for the fire and sword.

I did not hear anyone at the party complain about the taste, but perhaps they were sparing my delicate feelings.
Posted by ninalevy at 7:03 PM No comments: 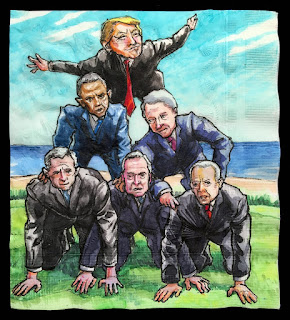 Both kids were home today so I was busy with feeding, cleaning and transporting activities, so this napkin suffered from lack of attention.

While I was drawing, I tried to sit down with my younger son and talk him through the various characters of the living former presidents and my memories and impressions of them, but we only made it to Bill Clinton before he completely lost patience with me.

Frustrated, I said something about how he always thwarted my attempts to teach him something and feel proud of myself for being educational. I was trying to be funny, but was simultaneously rather pathetic.

He said helpfully, "Oh, don't worry Mom, I am proud of you anyway."

Posted by ninalevy at 6:13 PM No comments:

Attack on /of Trump 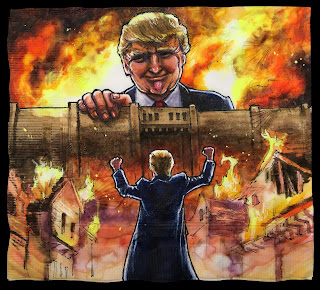 On the Eve of Presidents Day:

If you asked either of our sons to do an impression of President Trump, he would squint, purse his mouth, and then say, "We have to build a wall!" They are aware of other Trumpisms and policies, but the wall concept seems to upstage everything else.

In the wildly popular (in Japan) manga and anime series, "Attack on Titan," humans live in small cities surrounded by huge walls, attempting to shelter from huge, apparently irrational and monstrous, naked humanoids or "Titans" who roam the countryside beyond the walls, attempting to eat any regular sized humans they can get their giant hands on. Most of the human protagonists of the series are members of the Survey Corps, an elite fighting unit trained in physics-defying tactics to try to protect humanity from the overwhelming Titan threat.

The iconic image for the series in its print, film and television formats, is that of the largest of the Titans- "the Colossal Titan" looking over the suddenly insufficient wall, with the hero of the survey corps standing in the foreground, facing him.

So what does this have to do with Presidents' Day and Donald Trump?
Well, perhaps the wall is enough?

There's been a good bit of Trump as Titan in Japan apparently. And some memes involving Trump, the Attack on Titan wall and Mexico.

We debated who should be facing off against the colossal Trump on our napkin. The kids suggested the president of Mexico, but this seemed like an obvious and an unfortunate solution to me....and hard for me to convey in a drawing.

In "Attack on Titan," the situation is revealed to be more and more complicated as the series progresses. It turns out the politics of the wall are not at all clear cut and that the Titans and the humans inside the walls have more in common than our heroes believed at the beginning. The Titans turn out to be more than just irrational inhuman monsters who lack external genitalia. And regular humans can be inflated to Titan proportions.

President Trump has definitely made it clear that the contemporary American political landscape is more complicated and fraught that many (myself included) previously would have thought, and that threats might come from inside as well as outside...or as in "Attack on Titan" even from within the walls themselves.
Posted by ninalevy at 3:12 PM No comments:

Email ThisBlogThis!Share to TwitterShare to FacebookShare to Pinterest
Labels: 2016-17, Attack on Titan, Trump 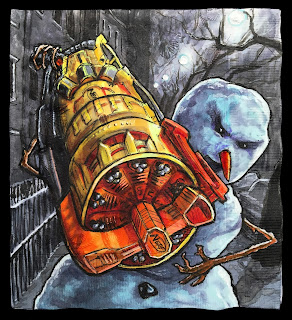 A belated napkin from our snow day last week:

Snow Goon with Nerf "The Judge" blaster that shoots many, many darts. (30 in groups of 3)

When my son suggested that I draw this particular weapon, he directed me to a couple of YouTube videos in which vloggers discuss a "leaked" snapshot of this not yet produced gun with the intensity and detail with which some might parse the Zapruder film or a grainy snapshot of Bigfoot.

Foolish me. I have only recently become able to say, or type, the word "vlogger" with a straight face, and now I have to get my mind around the concept that there are adults who professionally discuss hypothetical Nerf merchandise at great length and in great detail. And there are tens of thousands of people who watch them.

Previously, I had difficultly understanding why my sons, and thousands, if not millions, of other people wanted to endlessly watch a stranger play Minecraft on YouTube.

My sons frequently expand my aging mind to accept new concepts.
Mostly against my will.

Posted by ninalevy at 3:03 PM No comments: 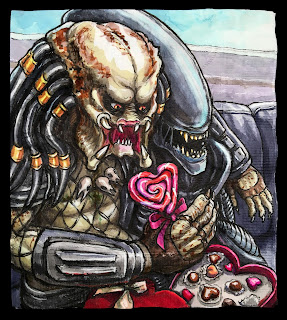 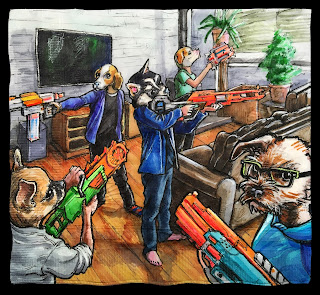 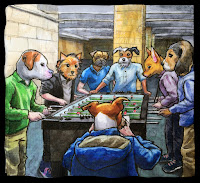 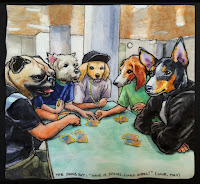 Posted by ninalevy at 1:34 PM No comments: 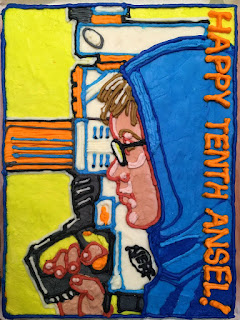 Nerf Regulator with Unregulated Blood Sugar:
(So much Nerf. So much frosting.)

Of course if you have a Nerf themed birthday party, you might have to buy more Nerf stuff to prepare. And then, of course, people might bring Nerf stuff as gifts.
And then, you might really have A LOT of Nerf stuff.
The birthday cake features the Regulator, a not yet released gun. Apparently it has significant new features which renders it an essential acquisition. And the cake also needed to include the profile of the birthday child wearing his signature blue hoodie.
I was a little out of practice on the manufacturing and frosting of cakes. My gluten, dairy and sugar privileges have been suspended, perhaps permanently...as have my staying up to 3 am to do things like squirt horrifying amounts of frosting on birthday cakes privileges.
Not being able to stay up late to wallow in sugar, dairy and gluten (and to snack on frosting while squirting it) did make the fabrication of this cake a bit more challenging.
While I did not feel particularly good about the appearance of the cake, I am told that it tasted pretty good despite the excess frosting.
Posted by ninalevy at 3:16 PM No comments: