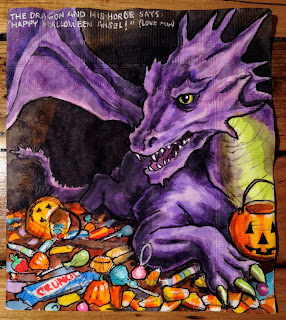 The kids thought this one was OK even though the dragon was a girly purple and not a trademarked character.

Happy begging for candy day. Our sons have been quite involved in their costumes, but let us not be confused: it's really about the candy....
Posted by ninalevy at 12:17 PM No comments: 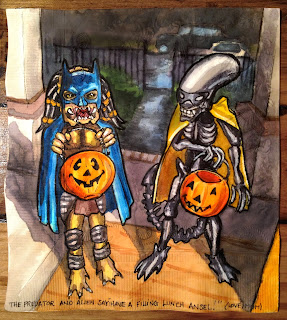 My kids always like to see a scary, powerful character looking insipidly cute.  They were not too impressed with my efforts here, however.  While I tried to make our murderous friends look childlike, my sons would have been far more pleased if had drawn drawn them as doe-eyed bobble heads. I
Posted by ninalevy at 4:04 PM No comments: 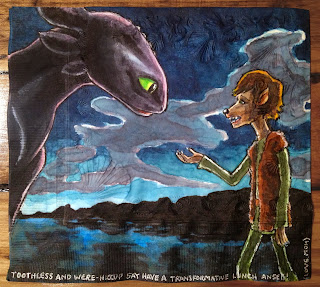 Halloween & Dragons #6: WereHiccup:  No doubt, Toothless is hoping that is a mask.

I think I might have reached the end of this particular series.  Perhaps we will try something else Halloween themed for the last two days before the actual trick or treating.

Which is not to say that the kids have lost any enthusiasm for "How to Train Your Dragon" or for their Hiccup costumes....I have already stated that last minute costume switching will not be tolerated this year.  I set a horrible precedent a few years back when Archer changed his mind and I somehow managed to cobble together a homemade Captain Rex costume in 48 hours.  And Ansel has a history of boycotting his intended costume at the last moment and going as "A guy in dark clothing" or the like.

Here's that Rex costume from 2009.  It's amazing what you can do with a sharpie, masking tape and a freshdirect box if you are insane....
Posted by ninalevy at 1:10 PM No comments: 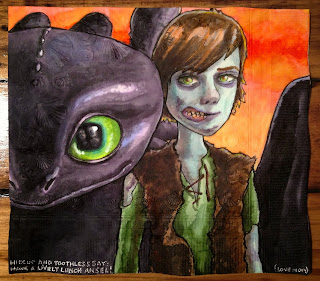 No Halloween series could be complete without zombie representation.

I thought maybe a decomposing dragon might be a bit much for lunchtime, so I left Toothless among the living.  Perhaps I was just being lazy.  At any rate, given Toothless's unflagging devotion to Hiccup, no doubt he would remain loyal even if the boy were an ambulatory corpse. 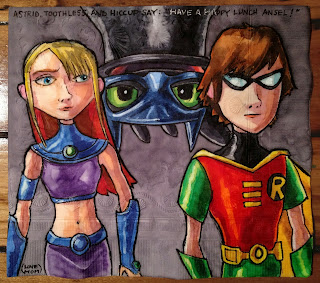 Halloween with Dragons #4:  Starfire and Robin with a Dragon wearing a Batman mask.

While the kids are much less fixated on Teen Titans Robin and Batman right now than they have been in the past (see all the Robin napkins, or the Batman napkins) I was pretty sure that Hiccup in a Robin costume was going to be an acceptable concept.

While Ansel chuckled when he looked at this, he did ask me what Toothless was wearing, so obviously I failed to sell the Batman mask.
Posted by ninalevy at 2:13 PM No comments: 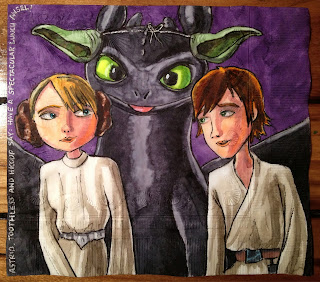 Halloween with Dragons #3:  Today Leia and Luke pose with Yoda.

Our kids aren't all that interested in the original Star Wars movie lately, so I am pretty sure this one would not have gone to school today had Toothless not been wearing Yoda's ears.

I briefly considered dressing Hiccup as Han Solo because of the whole sibling thing... and there's the vest parallel...But despite all the online fan girl enthusiasm for him, Hiccup just didn't seem like he could pull off the dashing scoundrel look.

Astrid And Hiccup Dress For Halloween 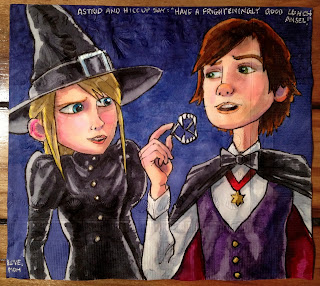 My older son insisted that Hiccup should be regarding a set of fake fangs with dismay. I am not sure exactly why...perhaps because they don't have such things in Berk.

He also argued that Astrid should be costumed as a chain-saw wielding serial killer. That seemed a bit harsh for the character...and for a first grade lunch at a Quaker School.
Posted by ninalevy at 8:42 AM No comments: 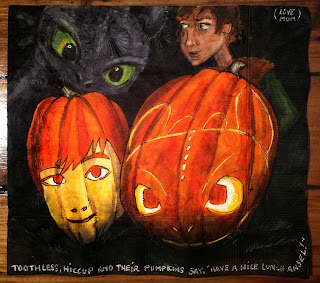 Halloween anticipation is building around here.  I already dread the let down that will arrive on November 1st.

The kids' costumes for Hiccup before and after the foot amputation are almost done.  There are some unresolved issues about representing the metal prosthetic foot and the strings at the neckline of his tunic, but otherwise we have most of it pulled together.  And by "we" of course I mean me.  The kids have contributed a great deal of art direction by way of strategic nagging, but have yet to actually make anything.

Perhaps there will be some more Halloween themed napkins between now and the actual evening when the Hiccups go out to demand candy.  I'm not sure if I can come up with anything interesting... much less 8 days of Halloween imagery, but it seems the kids can barely think about anything else. 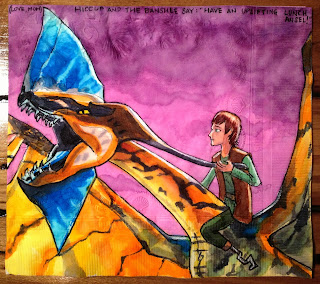 We managed to get the kids to sit through the second half of "Avatar" over the weekend.  (Being small boys, they found the movie too long, too talky, with not quite enough weaponry and fighting until the end...but they were quite interested in the lack of clothing on many of the characters.)

Afterwards, they told me that the Na'vi were a lot like the Vikings in the Dreamworks Dragons franchise...except the blue people don't wear as many clothes.
Posted by ninalevy at 12:32 PM No comments:

Email ThisBlogThis!Share to TwitterShare to FacebookShare to Pinterest
Labels: Ansel 2013-14, Dragons, Dreamworks Animation, How to Train Your Dragon, Movies, Team-up 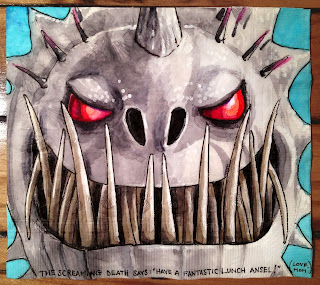 The excessively toothed dragon from Dreamworks' "Dragons: Defenders of Berk":
Definitely too many teeth for me to render in a responsible fashion in one evening.
Posted by ninalevy at 12:46 PM No comments:

Email ThisBlogThis!Share to TwitterShare to FacebookShare to Pinterest
Labels: Ansel 2013-14, Dragons, Dreamworks Animation, How to Train Your Dragon 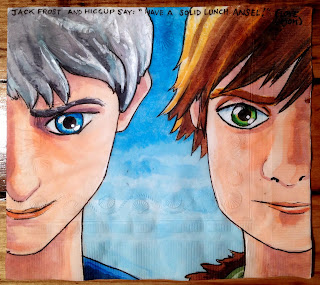 A classmate taught Archer how to draw "manga eyes" yesterday.  This seemed to mean enormous black eyes with two large white ovals on the iris.  Archer then taught Ansel, which led to my assignment for today's napkin to draw Dreamworks characters in manga style (as noseless bobbleheads) with enormous manga eyes.

As you can tell, I pretty much ignored this assignment.  Unfortunately,  I did spend more than my allotted 5 minutes Googling while trying to determine whether there really is a defined stylistic convention for eyes in manga.

I narrowed the characters down to just the two boys that our boys find to be the coolest, and decided to draw them large enough to display their oversized eyes.

At any rate, I offer this observation to explain why I ended up drawing Hiccup and Jack not interacting in a blank space.  After scrolling through all the fan art images of them snuggling, I couldn't come up with anything that didn't seem peculiarly suggestive as well.  While I am certainly not against imagining of a romantic link between the two boys, I was pretty sure that was not what my son had in mind for lunch today

Of course, they would have to be touching to have their heads this close.
Posted by ninalevy at 12:27 PM 2 comments:

Email ThisBlogThis!Share to TwitterShare to FacebookShare to Pinterest
Labels: Ansel 2013-14, Dreamworks Animation, Hiccup, How to Train Your Dragon, Movies, Rise of the Guardians, Team-up 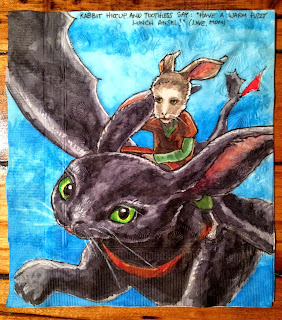 The heroes of the "How To Train Your Dragon" / "Dragons:  Riders of Berk" fall victim to the ridiculous rabbit treatment.

As Ansel would say: not one of my better efforts.
Posted by ninalevy at 9:55 PM No comments: 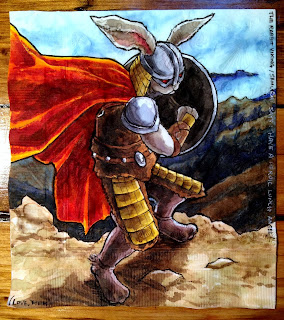 Our younger son really wants to determine whether his father might be allergic to pet rabbits...
Posted by ninalevy at 10:15 PM No comments: 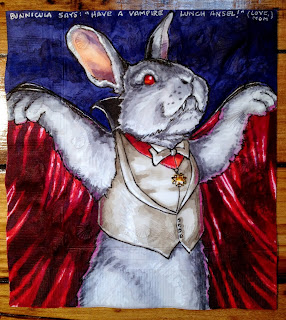 Bunnicula continues to compel Ansel.
He has begun a campaign for a pet rabbit.
Posted by ninalevy at 6:01 PM No comments: 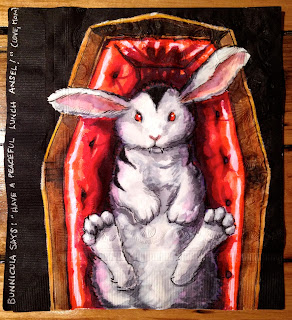 We've started reading one of James Howe's entertaining Bunnicula books, (Bunnicula Meets Edgar Allan Crow)  but I think Ansel's love of the vampire bunny character is still based purely on the concept.
Posted by ninalevy at 1:01 PM No comments: 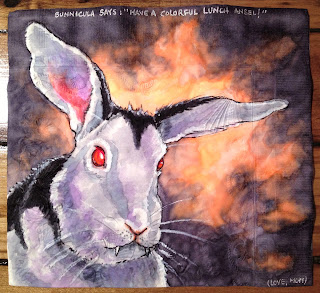 Ansel announced yesterday that he is now very interested in vampire bunnies.
He has yet to actually read any of James Howe's Bunnicula series, but apparently the concept is very appealing.
Posted by ninalevy at 4:02 PM No comments:

Millie As A Viking Dog 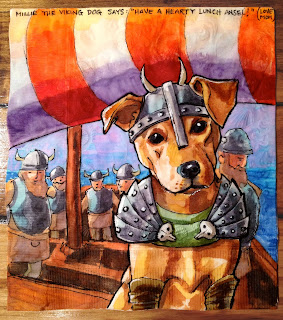 Our dog deprived younger son is always rather happy to see his aunt and uncle's dog Millie.
And he told me several times yesterday that he is "into Vikings."
Thus we have the Viking dog.

Archer took a look at the napkin this morning before his brother was up and said, "Oh, I don't think Ansel is going to approve that one."
He did...although not happily. 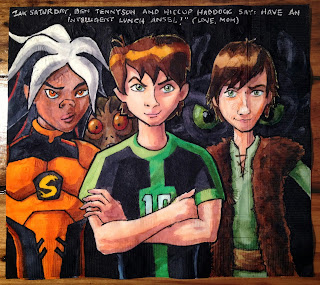 We had a lot of debate over just how old these three characters are supposed to be in their various television appearances. My sons generally argued for younger whenever there was a question, because it is perfectly plausible for them that a 10 year old boy should work as an equal with his parents in a dangerous situation... or save the universe. I voted for at least 12 years old... (Ben is supposed to be 16 in the latest show, isn't he?)
Posted by ninalevy at 12:44 PM No comments:

Steve from "...Meatballs 2" and Belt from "The Croods" 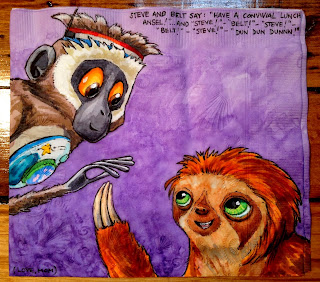 My sons' favorite characters from "Cloudy With a Chance of Meatballs 2" (viewed last weekend in a theater) and "The Croods" (viewed this weekend from the family couch) were of course the non-human simian, and simian-like, sidekicks.

Both kids were home sick on Friday...and for the rest of the weekend, so we were able to perform an experiment to see if children's brains can be liquified by watching too much TV.  (We watched the Croods twice, among other less intelligent fare)

Posted by ninalevy at 9:54 PM No comments: 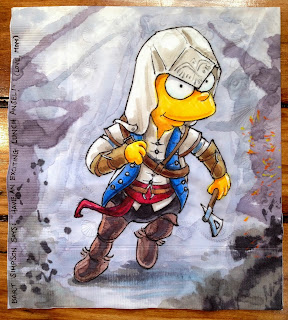 In the continuing spirit of Too Much Connor Kenway...

Ansel and Archer have recently started to appreciate "The Simpsons"... mostly because they think the show is full of inappropriate jokes.
Posted by ninalevy at 10:28 AM No comments: 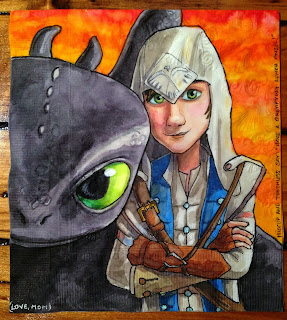 Ansel was planning to wear his older brother's Connor costume from last Halloween this year, but now both of them have to be Hiccup.
Posted by ninalevy at 5:48 PM No comments: 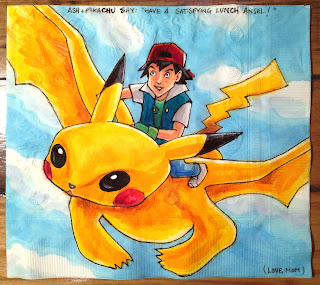 The latest "How To Train Your Dragon" spin-off, the TV show on Cartoon Network now titled "Dragons: Defenders of Berk," reminded both of our sons that they are pretty excited about Hiccup and Toothless.

We had all our Halloween costume choices made until they watched the lastest Dreamworks Dragons episode.  Now they are squabbling over who will get to be Hiccup....because they can't both be Hiccup... can they?

They were both amused by this napkin's Pokemon/Dragons mash-up anyway.  Each boy made a point of telling me the picture was funny this morning.  Not "hi-larious" (the highest praise)... but funny at least.
Posted by ninalevy at 11:28 AM No comments: