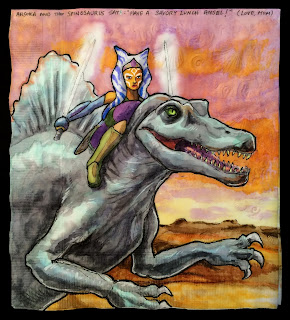 I did not consult the kids on this one, but somehow it made sense to me to put Ahsoka on the big bad of the third Jurassic Movie. Perhaps that movie is not fresh in your mind. I certainly could not remember it until I saw it recently. It is likely that I never saw it at all when it was released in 2001. At any rate, the Spinosaurus makes several appearances, eats several people, part of a plane and, presumably, a T-rex that it has killed.

I thought Ahsoka deserved a powerful dinosaur capable of vanquishing a Tyrannasaurus.  The Jurassic Park Spinosaurus also has a rather decorative skin with blue and orange markings on its "sail," so I hoped it would go nicely with Ahsoka's decorative "headtails." Sady, I did not have time to deal with dinosaur markings last night and had to more or less resort to amorphous dino grey/green.

The boys were very excited to see Ahsoka's reappearance in the recent episode of Star Wars Rebels. She was a big hit in the previous series, The Clone Wars. She appeared on several of my younger son's napkins long ago in the days before I started posting them here. Ahsoka was even so cool that my older son's best friend and Star Wars play pal was willing to "be" Ahsoka while my son was being Captain Rex or Anakin Skywalker. Unfortunately, the younger brother eventually received the message from his preschool classmates that it was not cool to like Ahsoka because, you know, she was not male.

Below is one of his Ahsoka napkins from 2008 or 2009, before gender conformity set in (and back when I was more sane and spent no more than 5 minutes on the drawings) 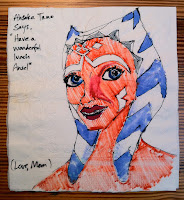 And one from three years later that did not go to school because it was deemed to be too icky: 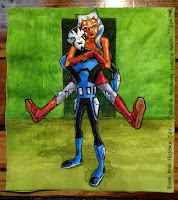 I am also pleased to see Ahsoka's return.
Posted by ninalevy at 11:43 AM