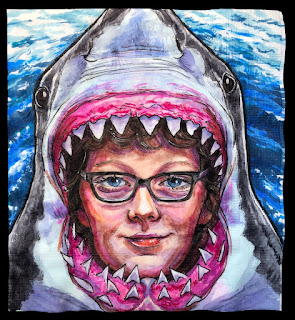 (The price and apparent desirability of Fortnite skins continues to boggle my mind...but I am a person who draws pictures on napkins for zero monetary compensation, so what do I know?)

Chomp Senior is a cool guy in a form-fitting shark-inspired outfit complete with a shark headpiece where his face is framed by the open shark mouth.

Sort of like this napkin, except I somehow forgot the important part which is that the cool guy is supposed to be wearing cool opaque black sunglasses.
Posted by ninalevy at 7:56 PM 1 comment:

Helmets on the Subway 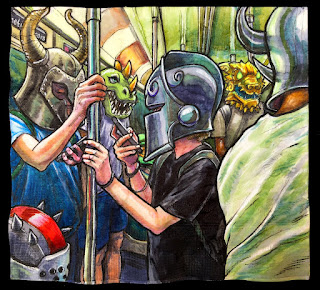 What if we could all wear our favorite helmets on the train?

Everyone is absorbed in their phone on the subway- a sort of digital, mental helmet.

But wouldn’t it be more fun to wear a Fortnite or Halo helmet? And you could worry less about other people sneezing and coughing on you.

I started thinking about this after watching our younger son wear a cardboard helmet on the way home from camp.

I seem compelled to draw things on the subway, though the environment is clearly way too complicated for my skill set (and maybe the napkin genre)

Just struggling to put one thing in front of another lends a weird outsidery art quality to the endeavor. And as a teacher at an institution that grants MFAs, I am afraid that my outsider privileges have been permanently revoked. Hashtag “notoutsiderartjustawkwarddrawing”

And despite the crowded train scene, I only managed to include 7 helmets, just the tip of the desirable helmet iceberg around here. 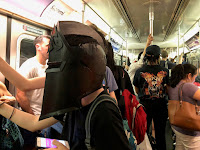 Posted by ninalevy at 4:30 PM No comments: 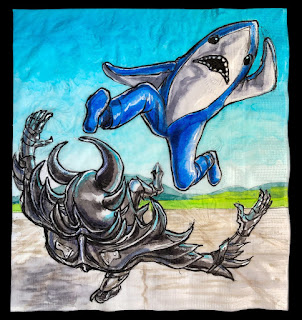 The kids have been playing Garry’s Mod. They are mostly interested in repeatedly blowing one another up with ridiculous weapons.

I thought their avatars could be interesting to draw in unweaponized acrobatic combat.

...and while the Left Shark was not all that challenging, the Skyrim armor was clearly a bit more complicated than I needed.

Posted by ninalevy at 4:59 PM No comments: 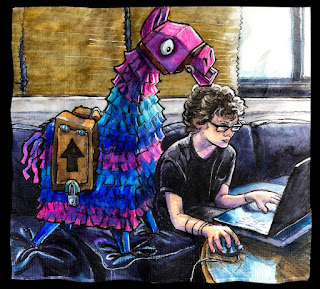 Damaged as I am by 15 years of sleep deprivation, I cannot hear the word “llama” without mentally echoing “Llama,  Llama, Red Pajama.” This is the hooky title of a children’s book that I read over and over again to at least one of our kids. (The younger one claims no knowledge of it, but that probably means I only read it to him 50 times instead of the 100 times I read to his brother.)

Five minutes of googling tells me that this 2005 book by Anna Dewdney has since become a “cultural touchstone” and a franchise (several sequel books, a Netflix series, a rap by Ludacris, etc) So I am no doubt not the only one burdened by the mental compulsion to echo all instances of “llama” with “pajama.”

But there is a strange relevance here in regard to Fortnite and online gaming....

Ms. Dewdney’s book was about a young person’s difficulty with staying alone in his bedroom without his mama.
As I recall, baby llama’s poor self-regulation eventually led to much “llama drama,” boo-hooing, and wailing, which finally summons his annoyed mother to tell him to simmer down and go to sleep....while of course reassuring him of her love.

The drama, wailing, and general poor self-regulation in our house is now less about separation anxiety and more about the frustrations of online gaming in general...and Fortnite in particular.

We had intense stress about llamas over the weekend. I cannot claim a deep understanding of these “llama”/piñata things’ role in the game, but their acquisition is essential. Hysteria can easily blossom when they can’t be found...or when, GOD FORBID, one is snatched away from under ones nose by another player.

Listening to my sons intermittently screech in frustration is perhaps unnecessarily traumatic for me. If only I, like the mother in the book, could successfully encourage less startling expressions of llama drama.

... but let’s be serious, I never succeeded in getting them to go to bed without drama.
At least we did get a llama, so there’s that.
Posted by ninalevy at 6:01 PM No comments:

Email ThisBlogThis!Share to TwitterShare to FacebookShare to Pinterest
Labels: 2017-18, Couch (the one at our apartment), Family, Fantasy Portraits of Kids, Fortnite, Video Game Characters 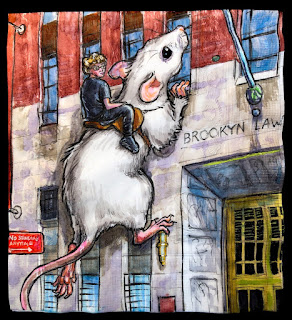 While we were on the pet rat topic, our younger son observed: “if the rat was big enough for me to ride to school, and then it climbed up the building...I would be the talk of the school!” Indeed he would.

The rat here is climbing up the facade of the building that houses summer camp. I think they might be more flexible about that sort of thing than would his regular school.
Posted by ninalevy at 8:20 PM No comments:

Ghost’s Mask From Ant-Man and the Wasp 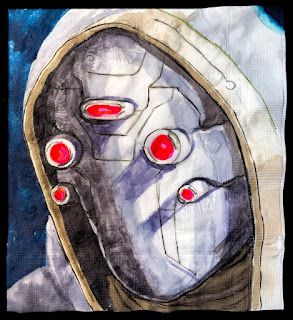 The Joy of Headgear That Totally Obscures Vision:

Don’t get me started about the quantum realm where Michelle Pfieffer apparently had decades of access to shampoo, mascara, and fingerless gloves...

And besides the character’s problematic relationship to physics, Ghost is definitely not a satisfying villain, or anti-hero, or whatever.

But, as far as our kids are concerned: she has a cool mask, so it’s all pretty good.

This particular napkin was a slapdash effort, produced in a rush in the morning before our departure for camp...when I was supposed to be making breakfast, folding laundry, unloading the dishwasher, packing the lunch....

I did not have time to capture the weird retro textural variations on the hood and suit...but did at least draw the weird, can’t-possibly-see-out-of-them, glowing, pseudo eye protuberances.
Posted by ninalevy at 7:09 PM No comments: 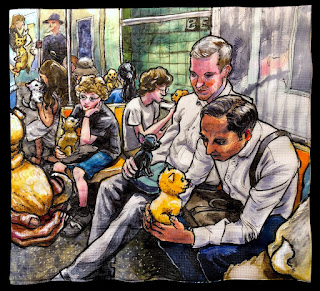 Handheld Puppies:
(What if everyone on the train had a personal puppy instead of a cell phone?)

I might be on the edge of becoming a full blown tinfoil hat wearing crazy person at any moment...but I will spare those not in my immediate family my thoughts on the topic of radiation. Let’s just say that I have a suspicion that maybe it is not a boon to one’s health to spend a lot of time underground in a metal tube full of cell phones that are constantly searching for a signal.

These sorts of thoughts don’t stop me from riding the subway daily. But I am grateful that our younger son is tall enough that strangers on a crowded train can’t hover their phones directly over his skull while they scroll Facebook between stations.

But wouldn’t be nice if we were all looking at our own personal puppies instead of phones?

Dogs have been clinically proven to improve the health of their human companions, but they are not exactly encouraged on the subway.
Posted by ninalevy at 9:06 PM No comments: 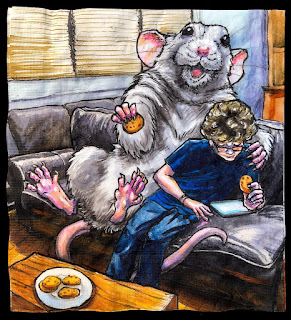 We still remain petless despite our younger son’s sincere and persistent requests for a dog.

As I am sure I have already mentioned, I suggested to the kids that a rat would be a smaller, easier, pet...and maybe something that would not aggravate their father’s allergies.

Unsurprisingly, no one wants a pet rat.

Maybe we see too many of the non pet variety on the subway....and in our yard and garbage cans.

During one of our pet rat conversations, our younger son said, “we can get a pet rat, as long as it is larger than my brother and can teach me Kung Fu!”

Then there was some bickering about whether the hypothetical rat should be named Splinter or Ratatouille.

If only there were a giant rat that could cook and provide educational exercise for the kids...

More likely the large rodent would be sitting on the couch eating cookies and watching YouTube just like the kids.
Posted by ninalevy at 5:43 PM No comments:

Email ThisBlogThis!Share to TwitterShare to FacebookShare to Pinterest
Labels: 2017-18, Couch (the one at our apartment), Giant House Pets, Movies

Mask in Blue and Gold 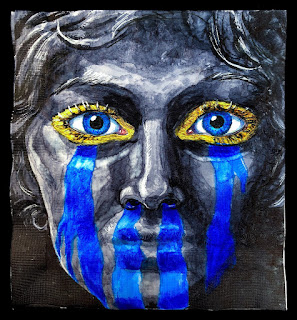 Mask in Blue and Gold:

The camp project was a clay face mask:

I am resisting even attempting an interpretation of his imagery.

But I did make a lessor napkin version. 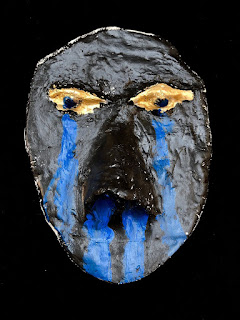 Posted by ninalevy at 3:24 PM No comments: 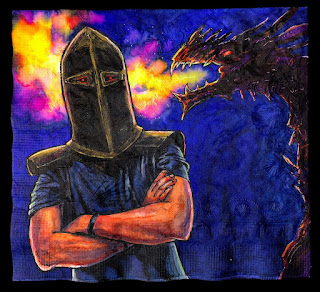 Our younger son is working on a video at camp that features a knight and a dragon. We spent the Fourth of July making the knight’s helmet pictured here out of cardboard.

Fashioning compound curves out of corrugated materials proved way more challenging than I anticipated. I vaguely remember knocking out a cardboard “Captain Rex” Star Wars clone trooper helmet in an evening with time left over to draw the rest of the costume in Sharpie on white pajamas many years ago... So many years ago that my older son was young enough to develop a life threatening need for a clone trooper costume the night before Halloween...and apparently I was young and foolish enough to make him one.

I don’t remember that helmet being so challenging, but perhaps I was just not sleeping enough at the time to form accurate long term memories.

Or maybe this loss of helmet building skill is a symptom of progressive cognitive decline: losing one’s keys, poor word retrieval, and the “inability to fashion helmets out of flat materials”

In fact, I am a little sleep deprived right now. Can you tell?

My son is now telling me that we need to remake the helmet over the weekend as he has decided that it requires a more complicated design.

At least the dragon is two dimensional.


Here’s the previous helmet from way back in 2009
Maybe it was more impressive in my memory... We were going to see the latest Jurassic World movie today to celebrate our independence from weekday routine. But one kid was not feeling well enough to consider consuming a large soft drink and a tub of popcorn, so we are festering at home instead.

Alas, no bomb pops were consumed either.
Posted by ninalevy at 4:45 PM No comments: 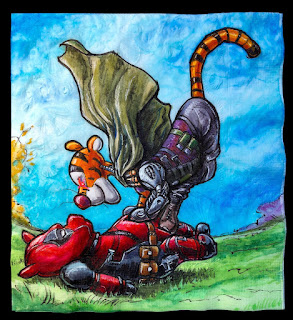 Having sat through the “Christopher Robin” movie preview a couple of times now, listening to Ewan McGregor say, “POOH!” repeatedly....well, it seemed like we had to have a DeadPooh.

I was thinking about pairing him with Spider-Tigger-Man, or maybe Wolverine/Tigger, (too much claw similarity) but our younger son thought Cable was a better bet.
Perhaps I was just trying to avoid the additional labor of figuring out what Cable was wearing in Deadpool 2 and exactly what his arm looked like.

As it was, I neglected to draw the stuffed bear on his belt...but perhaps that would have been redundant...or meta?
Posted by ninalevy at 6:02 PM No comments: