The Unicorn Takes on "Zilla" 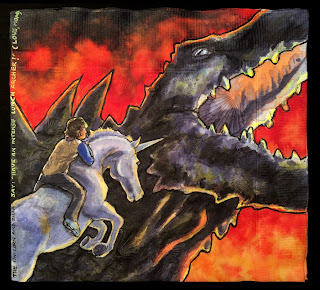 (But only the less popular Kaiju)

Our older son can provide chapter and verse about the differences and relative merits of the various iterations of Godzilla. Unsurprisingly, his information and opinions come mostly second hand. He hasn't actually watched all those obscure-to-western-viewers 1960's Toho monster movies. I suggested to him that he probably wouldn't have the patience to sit through, say, "Mothra vs. Godzilla" from 1964, or even the 1992 version, "Godzilla vs Mothra." He replied, "Oh God, mom, of course not! That's what Youtube is for!"

Through watching YouTube, he managed to pick up the near universal fanboy condemnation of the 1998 American Godzilla movie. (the one with Matthew Broderick) That monster is known among the kaiju cognoscenti as "Zilla" because "they took the God out of Godzilla." If you want to know more about what that sentence means, I recommend the Wikipedia entry...or spending an ungodly amount of time watching YouTube commentary.

When my son asked me to draw him riding a Unicorn "Kaiju Killer" like the one pictured in 101 Ways to Use a Unicorn by Robb Perlman and Dave Urban, I knew it had to be "Zilla."
Posted by ninalevy at 12:40 PM