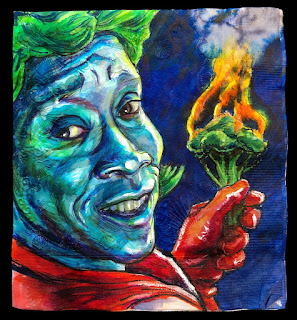 When our younger son suggested I draw Captain Planet today, he was thinking of the original animated show “Captain Planet and the Planeteers” from back in the 90’s.  It was considerably after my time, and well before his.

I gather both of our kids were aware of Captain Planet because of its memeification... (is that a word yet?) and because one notorious episode concerning drug addiction features an overdose, so the internet is interested in that sort of thing.

But I do remember the Don Cheadle parody where the Captain goes insane and turns everyone into trees: “Remember to recycle or I’ll turn you into a f*cking tree!”  He is quite on the wavelength of Ultron and Thanos, destroying humanity for its own good.

I think there was also a bit where he turned a guy into broccoli for failing to recycle a bottle.

We had a long history with my passive aggressive representations of broccoli on my kids’ lunch napkins, so a flaming floret seemed appropriate for today.

Posted by ninalevy at 7:59 PM No comments: