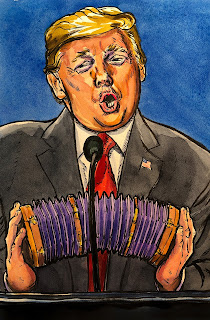 (Or Maybe the Concertina)

Huw Parkinson’s videos of Donald Trump apparently yanking an accordion back and forth while delivering speeches were in broad circulation back in January of 2017. But sadly, our kids did not bring them to my attention until relatively recently.

Once one has had it pointed out that Mr. Trump repeatedly makes peculiar hand gestures that positively beg for the addition of a cartoon squeeze box, it is very hard to unsee it.  I was on the lookout for the gesture during last night’s debate, and was not disappointed. It is good to have something to occupy one’s attentions besides what is actually being said.

In the past, anything remotely approaching a political commentary here has been received with a fair amount of negative blowback.  Our younger son would like me to remind you that, during a Star Wars / Politicians series of napkins, after I drew Trump next to Jar Jar Binks, one commenter posted that the only way to appropriately even the score would be to draw Obama next to Satan.

Perhaps I should draw Biden with an appropriate musical instrument? Or a Star