Great flamethrower! Where can I get one? 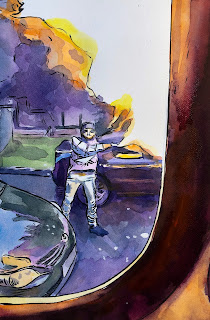 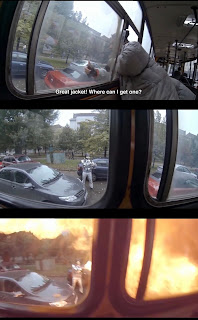 The Gayest Flamethrower You Have Ever Seen:

This clip has been around since 2016, but my older son was enjoying it enough recently to show it to me. I thought it looked like it came from a movie, but couldn’t place it immediately.  A disheveled man sitting on a bus suddenly jumps up and yells out the bus window in Russian, “Great Jacket! Where can I get one?” at a man who appears to be wearing a top made of mirror shards. The mirrored man responds promptly by shouldering a flame thrower and setting the bus on fire.

The clip is easily found online by searching for ‘Great Jacket’.... or by the preceding line delivered in English by the same character, “That has got to be the gayest jacket I have ever seen!”  One can also discover that the clip comes from the 2016 Russian film, “Hardcore Henry.”

I remember how much our younger son wanted to see the movie when it was released. It is essentially a feature length first person shooter, filmed by literally strapping the camera to the central character’s face. Henry is relatively inactive in these few seconds of film, but for the rest of the movie he is shooting, punching, jumping, running, or blowing things up nearly incessantly.

I don’t think I have the stamina to make it through the entire movie, so I cannot explain the reason or the sexual orientation behind the mirrored jacket. But it is an incongruous moment in the movie, perfectly suited to memehood.