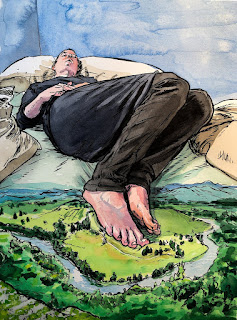 The benefits of grounding or earthing are a matter of some debate. It sounds plausible that using conductive contact with the ground to diminish an accumulated positive charge and associated free radicals and inflammation could improve health...and sleep.

But the science is murky. There’s just not a lot  of financial incentives to do a double blind placebo controlled trial about whether something like walking on the beach barefoot improves ones health.  Obviously that would be a rather difficult study to create a placebo for anyway.

But for those of us without opportunities to hang out seaside shoeless, there are things like grounding bedsheets. These conductive surfaces that plug into the ground in an electric outlet supposedly create the effect of being in contact with the earth.

In my ongoing project to try everything that might help me sleep...and make me a less inflamed and cranky person, I have tried such a sleeping surface.

Despite really giving the placebo effect a good go, I did not see an improvement during the month I spent sleeping with my feet on a slightly unpleasant rubbery conductive surface. (yes, I know I was supposed to put the sheet over it, for you grounding experts out there. I won’t go into the oddity of my sleeping arrangement right now)

In fact, my sleep got markedly worse. This may be due to other causes. It’s damn hard to run a controlled, one variable test on oneself even if you are not a person who is constantly tinkering with supplements and other interventions.

However, I really like my rubber-sole-less (supposedly grounded) shoes. Though I do live in the New York metropolitan area which means I have to avoid stepping on manhole covers and the like when not protected by rubber soles. But maybe I just like the shoes for other reasons besides conductivity.

I will probably try the conductive sleep surface again. For the moment, I will imagine my sleeping feet are in a beautiful  landscape in south east Asia.

Email ThisBlogThis!Share to TwitterShare to FacebookShare to Pinterest
Labels: 2019-2020, I’ll Sleep When I’m Dead, Inktober 2019, Not a Napkin, Self Portraits, Watercolor