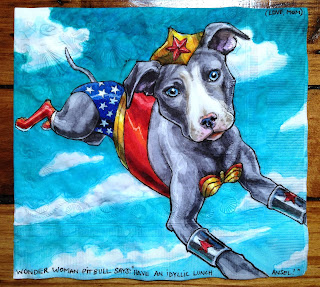 Ansel was a big fan of Wonder Woman in the days before he received the message that boys should not like female superheroes in flashy outfits.

There was even a Halloween somewhere between 2 and 3 years of age where we discussed the possibility of a him wearing a boy version of a Wonder Woman costume. (There are plenty of female spin-offs of male heroes- Batgirl and Supergirl to name the obvious, but not so much in the other direction.  Where is "Wonder Boy"?)

I thought Diana ought to be represented by a pitbull as she is more physically powerful than many other  supers.  And her disposition is sometimes rather on the tenacious side.  That said, I am no authority as we don't follow her very closely around here because that would threaten our collective masculinity.

Looking at the napkin this morning, both boys chuckled uncomfortably.  Ansel told me that my choice of a Pitbull was inappropriate.  It took me a while to determine that his concern was that the word "Pitbull" sounds too much like "nipple"....and I guess when we are talking about Wonder Woman, breast related words naturally come to his mind.
Posted by ninalevy at 10:58 AM