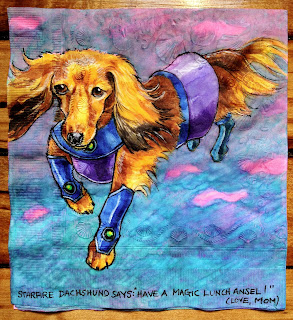 I finally pushed the super canine series past Ansel's comfort zone:  This one was just too girly and lacked a masculine mask.

I gave careful consideration last night to what sort of dog was going to do the Teen Titans' Starfire's flowing orange hair and tawny complexion justice, but the kids were not impressed.

I decided to use the Teen Titans television show design of Starfire's costume rather than the sublimely-ridiculous-on-a-dog (and just plain ridiculous on a human) comic book version of her costume.  While it would not be particularly sexy on a dachshund, the reference seemed a bit strong for Kindergarten.

I find I am suffering from an urge to draw Wonder Woman as a Pit Bull, but I know that will not go over well.

Ansel took an old napkin to school this morning.