Zak and Komodo from The Secret Saturdays 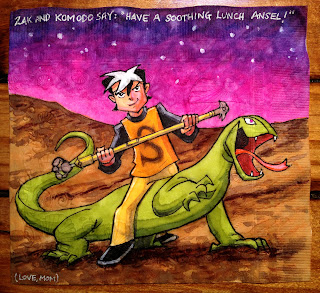 Over the last week, Ansel discovered how much he likes "The Secret Saturdays" a Hanna-Barberaesque series that ran from 2008-2010 about the adventures of a family of cryptozoologists and their cryptids pals.   Ansel's purported favorites are 11 year old Zak and Komodo the genetically altered Komodo dragon, but I am guessing that the main female character Drew who sports a skin tight jumpsuit, thigh high black boots, and torpedo shaped breasts, is a draw also.

He was most annoyed to hear that the series has been out of production for three years and it is very unlikely that there will be any additional seasons of episodes.