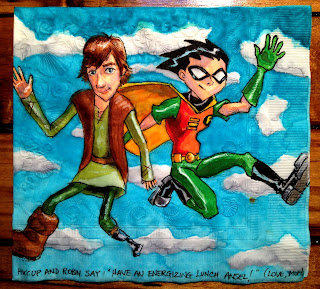 In his superhero context, Robin is all about brains over brawn.  Like Hiccup, he is the smart, skinny guy in the group.  But everything is relative, and Robin might be a hard guy to keep up with, particularly if one has a metal foot.  Then again, Hiccup does have his own personal dragon.

But perhaps Hiccup looks less than pleased because he knows I did such a poor job drawing him?  Hiccup lives in a different anatomical universe than the Titans, and pairing him with Robin made him look more wimpy than usual by comparison.

Ansel accepted this napkin without comment this morning, so maybe it didn't look too bad to him
Posted by ninalevy at 11:07 AM