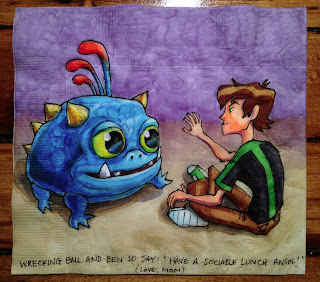 Ben 10 (the Omniverse version) and Skylander's Wrecking Ball sit around in bad perspective land.  Ansel was not bothered by my lazy drawing, but both he and his brother worried about why Ben was not standing up and just what he was doing with his hand.

I realized a day later, much to my horror, that I had neglected to draw the all important Omnitrix on Ben's arm.  Strangely, neither of my child critics caught the lapse.