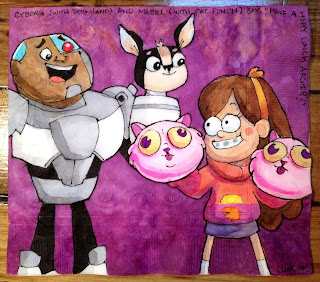 Archer failed to give me a request last night as he had locked himself in the bathroom to read a book past bedtime...so I rolled along on a Gravity Falls theme.

Last night, he thought Mabel's "Kitten Fists" were extremely funny.  As he was demonstrating them to me again this morning, I offered that I had drawn them on his napkin.  He literally recoiled in horror at the awful girlyness of the idea. (And he didn't even know that the background was magenta)

I told him he would have to hide the napkin in his lunchbox today, and that he should be sure to ask for an appropriately masculine image for tomorrow.
Posted by ninalevy at 1:32 PM