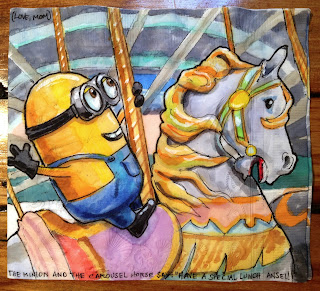 Ansel conked out last night without telling me he wanted on the napkin for today. Suffering from heat stroke and sleep deprivation, I was unable to think of anything sufficiently cool to draw.

His camp group is going to the Prospect Park Carousel today, and he and Archer rode some small fiberglass horses at the local street fair (The Feast of Our Lady of Mount Carmel for those up on neighborhood trivia) last evening

Foolishly, I thought perhaps a carousel horse, and an ever popular minion might be acceptable.
Instead, Ansel took an old napkin that he had not used before, The Macho Tooth Fairy.  I guess this napkin at least served the purpose of making that one seem more acceptable by comparison.
Posted by ninalevy at 11:52 AM

Email ThisBlogThis!Share to TwitterShare to FacebookShare to Pinterest
Labels: Ansel 2012-3, Minions (Despicable Me)