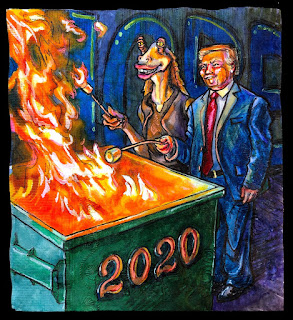 One last incendiary image for the year, badly drawn on an absorbent paper product.

Our most inflammatory napkin was the pairing of Trump and the Star Wars prequels buffoon, Jar Jar Binks, back in the pre-end times of January 2016.  At the time, I wrote something about how my sons, despite knowing little about politics at the time, had an irrational hatred of Donald Trump, which was possibly only exceeded by their irrational hatred of Jar Jar.

We had just watched “The Revenge of the Sith,” so I was thinking about the fanboy theory that George Lucas had originally intended for Jar Jar to be revealed at the end of the saga to be the top Sith Lord, the ultimate bad guy. My title for the post was “Could Idiocy Mask an Evil Master Plan?”

There’s definitely been enough idiocy and genuine evil to go around this year, (and the four years that preceded it) but I don’t think the two have been conspiring in quite the way I was suggesting back in 2016.

As I mentioned, it was definitely our most vehemently protested napkin post. Unsurprisingly, no one spoke up to support Jar Jar. I had not considered that we had many followers who would be so offended by this pairing. One irritated commenter memorably suggested that I needed to draw Barack Obama with Satan to even the score.

Poor Jar Jar. At least he presumably lives long ago in a galaxy far, far away.....

Here’s to hoping that 2021 will not be so frequently described as a container of burning trash.