What do Jar Jar Binks and Donald Trump Have in Common? 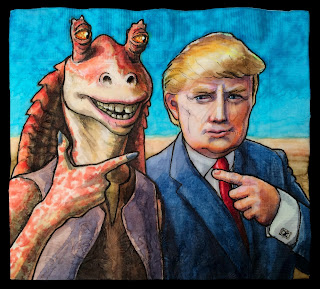 Our kids are sadly not particularly politically informed. (I will admit my guilt here, although I am still working on conveying some basic concepts like their excruciatingly over privileged status as well fed and educated, white male Americans)

But despite their lack of interest in politics, they have somehow acquired a violent dislike of Donald Trump. While my feelings about the man who I still think of as "The Donald" are definitely not positive, we have done our best to ignore his recent ridiculous antics, so my sons' loathing of the man did not come from anything I or their father have said. Their hatred of Trump is total and visceral, yet does not seem tied to any political positions he holds, anything specific that he has done, or statements that he has made.

The only other individual who might be equally reviled by my sons is, of course, Jar Jar Binks.

We watched "Revenge of the Sith" last night. And while it was more tiresome than I remembered, the movie reminded me of the fanboy theory that Lucas had originally intended for Jar Jar to be revealed at the end as the top Sith Lord- the ultimate bad guy. Some hypothesized that Jar Jar's dimwitted behavior in the first two prequels was supposed to be a diversion from his evil machinations, but that the fans' violent hatred of the character prompted Lucas to lose his nerve and change the ending.

It is appealing to think that there was a reason for the Jar Jar character to be so very annoying, but I fear the theory does not seem very likely to me.

It is not so appealing to consider that Mr. Trump is intentionally deflecting our attention from serious issues with his annoying and idiotic statements...and it seems extremely likely that is an accurate description of the situation.

My younger son was frantically concerned that I not post this image because someone might mistake it for support of Mr. Trump's campaign. He made me pledge that I would add: "Jar Jar and Donald Trump: Separated at Birth?" just in case anyone might be confused.