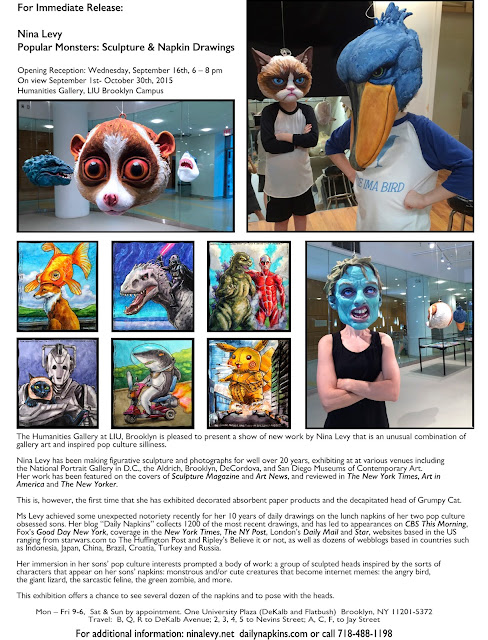 Text of the Press Release:

The Humanities Gallery at LIU, Brooklyn is pleased to present a show of new work by Nina Levy that is an unusual combination of gallery art and inspired pop culture silliness.

Nina Levy has been making figurative sculpture and photographs for well over 20 years, exhibiting at at various venues including the National Portrait Gallery in D.C., the Aldrich, Brooklyn, DeCordova, and San Diego Museums of Contemporary Art. Her work has been featured on the covers of Sculpture Magazine and Art News, and reviewed in The New York Times, Art in America and The New Yorker.

This is, however, the first time that she has exhibited decorated absorbent paper products and the decapitated head of Grumpy Cat.

Ms Levy achieved some unexpected notoriety recently for her 10 years of daily drawings on the lunch napkins of her two pop culture obsessed sons. Her blog “Daily Napkins” collects 1200 of the most recent drawings, and has led to appearances on CBS This Morning, Fox’s Good Day New York, coverage in the New York Times, The NY Post, London’s Daily Mail and Star, websites based in the US ranging from starwars.com to The Huffington Post and Ripley’s Believe it or not, as well as dozens of webblogs based in countries such as Indonesia, Japan, China, Brazil, Croatia, Turkey and Russia.

Her immersion in her sons’ pop culture interests prompted a body of work: a group of sculpted heads inspired by the sorts of characters that appear on her sons’ napkins: monstrous and/or cute creatures that become internet memes: the angry bird,  the giant lizard, the sarcastic feline, the green zombie, and more.

This exhibition offers a chance to see several dozen of the napkins and to pose with the heads.