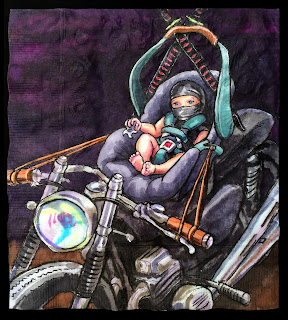 Death comes out of a Graco car seat:

My younger son and I have a new daily school commute to the upper west side of Manhattan.  Unfortunately, much of the time is spent standing up, packed into one or the other of the two subway trains involved.  This is a particularly unpleasant situation if one is, say, the size of an 8 year old, and not accustomed to a New York City subway rush hour. (It seems to be rush hour even at 7 am) I've been doing my best to offer distractions, but so far he has spurned my offerings of music and books.

He has been amenable, however,  to passing the time by discussing our much talked about, but still as of yet, nonexistent, family web comic.  Axe Cop, the collaborative comic that was created by a 5 year old and his much older comic book industry professional brother is of course an inspiration.  My sons are good at coming up with wacky characters, but they have yet to develop any plot for this comic.  The younger one suggested on the train last week that perhaps there should not one story, but instead a series of related shorts.  That sounded more manageable...but we still need some sort of plot.

Last week on the train, he also hatched the idea of "The Baby Ninja." I suggested maybe it could be "The Infant Ninja."  We discussed what sort of infant accessories this ninja might have... throwing star teethers, a car seat that affixes to a motorcycle, a pacifier that doubles as a face mask. It seems also to be quite inspired by Dr McNinja, another webcomic that my sons really enjoy.

Of course, my sons expect me to do all the drawing of this comic....
Posted by ninalevy at 1:19 PM