Toothless and Hiccup Are Confused By Candy Corn 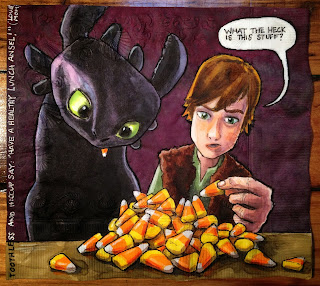 My kids requested an image of Hiccup being confused by candy corn.  They hypothesize that there is not probably not mass-produced candy in Berk.

Our older son has given some careful thought to the quality of Hiccup's life.  He told me that he thinks that Hiccup has it better:  He has a dragon, doesn't seem to go to school, and is pretty independent. I pointed out the likely lack of video games and refined sugar in Hiccup's environment. (I think the napkin request hails from this point in the conversation)  Archer offered that he would be willing to trade the iPad for a real dragon.  That seemed more or less reasonable, but I added that, at least in the Dreamworks version, Hiccup does not appear to have a mother.  Archer replied, "He seems to do well enough without one."  So there Mom.
Posted by ninalevy at 12:34 PM