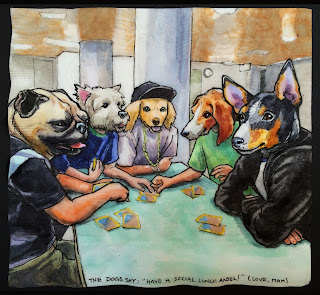 No cigars were smoked during the making of this picture.

The boys were photogenically arranged around a table in the cafeteria last Friday morning, playing with some Harry Potter cards. Earlier in the week, I had turned a bunch of snapshots into a napkin with kids with animal heads. So when I took a few pictures on Friday, my son told his friends that I was probably going to make a drawing of them with funny heads. That seemed like a request of a sort to me.  Later, he and I talked about replacing their heads with those of superheroes. Though I wouldn't rule that out for a future image, I have to admit that  I was daunted by the prospect of having to choose who got to be Batman.

After looking at the snapshots, the mother of the Golden Retriever on the napkin above emailed helpfully:
"Dogs and cigars, Nina."
Once I had been reminded of poker playing dogs, I could not resist turning all the boys into various canines.

(Apparently the above "classic" 1903 painting of dogs playing poker by Cassius Marcellus Coolidge was part of a pair that sold for almost $600,000 back in 2005.)

I still had to make all those hard decisions about who was going to be which breed.  After lengthy consideration, my son picked out a Basenji for himself. I did the best that I could with the others.

I'm sure I will hear some criticism about my choices on Monday morning.
Posted by ninalevy at 5:19 PM