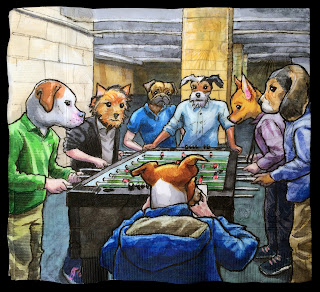 Never underestimate the appeal of Foosball....or of dogs.

Our younger son's school is in temporary quarters for the rest of the year, so amenities are rather limited, and the recreation space is a somewhat bare and gloomy basement.

But they do have a Foosball table, and that seems to be more than enough. Whenever I arrive for pickup, there is a large excited group of kids hopping up and down around the Foosball table. We often have to stick around for as long as possible so as not to miss any critical Foosball action.

I drew less kids on this napkin than are usually involved in the game, as I could only put so many dog heads together on short notice. My son was very concerned about which kid was which canine, but as this drawing was based on a concoction of several snapshots, I can't say that I chose the dog breeds based on the individual kids' personalities.

For the sake of full disclosure, and since he asked me repeatedly, my son is the second from the left. He says I made him look fat, but I disagree.

Speaking of the appeal of Foosball and dogs...I had to sit through the preview for "The Underdogs" movie multiple times last year, but now I see that after many reschedulings, its US release has been cancelled... My sons were very positive about the possibility of seeing a movie about Foosball table characters magically come to life in order to play soccer, but I lost patience after repeated viewings of the preview. Wikipedia tells me that this movie set the all time record for the box office opening of an Argentine film, but perhaps the appeal of Foosball was not enough to insure its distribution in the States.

(See a similar napkin from last year, "Cafeteria Dogs" at this link. I was able to be more thoughtful about dog breed choice in that case.)
Posted by ninalevy at 2:20 PM