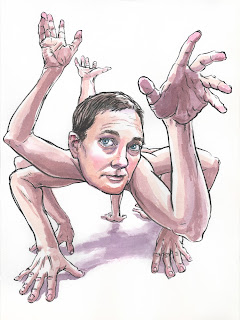 Sometimes challenge leads to improvement and adaptation.
And sometimes not.

This is it, I promise.  This is drawing #31 for inktober 2016, started on October 31st, and full disclosure, finished on November 1st.  Halloween and the days before were rather busy, with costumes to be assembled and trick or treating and such, so I fell behind on posting. I can no longer stay up late at night to finish anything, so here it is November 4th, and I am still finishing up on October.

Just to recap for those of you who have not suffered through the whole month's worth of drawings...
Inktober is a yearly drawing challenge originated by artist and author Jake Parker. The premise is that one tries to complete at least one drawing in ink per day for the entire month of October. Mr. Parker also provided various thematic prompts for each day which I completely ignored.

I did not start out necessarily thinking that I was going to wallow around in my recent personal experiences in health problems and alternative medicine, I planned to make some humorous images of heads based on silly pseudoscientific medical terminology. But pretty quickly it became clear that I could not put rat feet on anyone else's head. And since it was me, it became about me as well.

My apologies to everyone who is here for the napkins. This series is officially over.

Back to regularly scheduled programming.
Posted by ninalevy at 3:31 PM

Email ThisBlogThis!Share to TwitterShare to FacebookShare to Pinterest
Labels: Inktober 2016, Maybe You Should See a Doctor About That, Not a Napkin, Not Trademarked, Watercolor