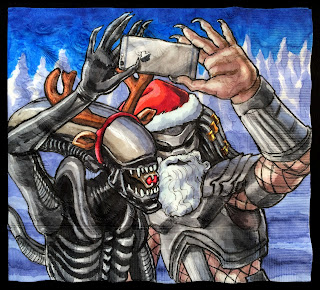 If it bleeds, we can celebrate Christmas with it.

Christmas is a pretty secular holiday at our house. When I was a child, I thought I could be both Jewish and Christian at the same time. But the reality is that despite the lighting of Hanukkah candles and the trimming of Christmas trees, we are not playing for either team.

But we can embrace the general spirit of generosity and togetherness in the season... particularly when it comes to the characters from violent movie and video game franchises.  The Santa/Rudolph theme is popular with the kids even if they don't have the same irrational affection for the old stop motion Rudolph TV show that I do.

I am afraid that they have more affection for the Alien vs Predator franchise in fact.
Posted by ninalevy at 1:23 PM