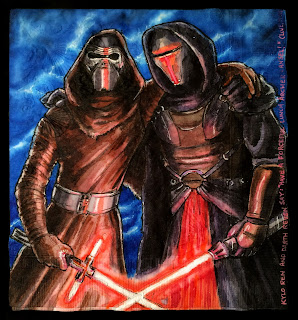 Everyone needs a little R & R in their Star Wars universe.
(Pithy tagline provided by my 12 year old son)

When the first "Star Wars: The Force Awakens" trailer came out a few months ago, there was a lot of conjecture about just who was that guy with the red lightsaber with the cross guards?  Some Star Wars authorities opined that it was a "Knights of the Old Republic" character, Darth Revan. Of course, Darth Revan lived thousands of years before the events of the Star Wars movies.... (You already knew that, right?) Therefore, it was rather unlikely that he would be appearing in the movie.

I guess he was such a cool dude that people were still hoping that the guy in the mask was going to turn out to be him. My older son tells me that Darth Revan could crush a planetoid the size of the Death Star just using his force powers. Take that, Luke Skywalker.

At any rate, while this Revan person is not in the upcoming film, it seemed like he should be paired with the guy who is, Kylo Ren.

They can commiserate about how challenging it is to not be able to see out of one's helmet, and how hard it is to go to the bathroom while wearing a floor length robe.

Perhaps the force comes in handy for that sort of thing.
Posted by ninalevy at 6:09 PM