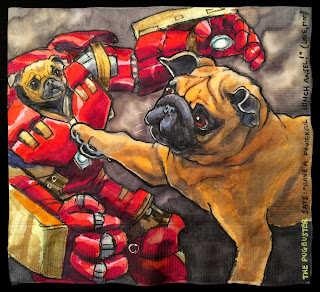 As previously mentioned, Iron Man's super-sized anti-Hulk suit was one of my sons' favorite parts of the recent Avengers movie... And giant dogs are always good.

Over the weekend, our older son kept telling me I should draw this "Pugbuster."  The main appeal of the idea seemed to be the name. We were all unclear on whether "Pugbuster" meant that the Pug was wearing the armored suit, or whether the suit was designed to fight a Pug the size of of the Hulk (and the size of Battlepug, one of our web comic favorites)

I am indecisive, and I enjoy drawing Pug faces, so I said yes to both scenarios.

This morning, looking at the napkins, my older son told me that I blew it- that I should have made the giant Pug Hulk green. My younger son said that the suit should have had an armored Pug face on it. I explained to him that I had considered that, but after finishing cleaning up the kitchen at midnight, I chose the easier path of just drawing a dog's face.  Drawing the rest of the suit had been challenge enough. He said, "Oh it's not hard, you just draw an Iron Man helmet and make the yellow part look like a Pug's face.....

Maybe next time.
Posted by ninalevy at 12:28 PM