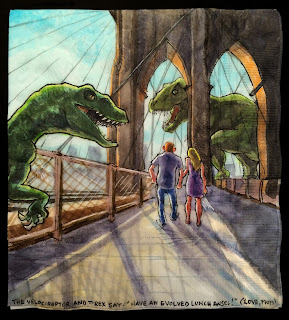 Years ago, our sons bypassed the little boy dinosaur obsession phase. Skipping ahead to Star Wars and Batman, they neglected the parent pleasing business of learning all the names and attributes of Brachiosaurs and and Pterodactyls.

However, this doesn't mean they don't appreciate dinos, particularly if a movie trailer suggests that they might be running alongside Star Lord on a motorcycle. Our younger son insisted that we should prepare for the upcoming "Jurassic World" by watching the preceding Jurassic Park movies from the 90's.

Since the second grade class is taking a walking tour of the bridge today,  it seemed like a good venue for a T-Rex and a Raptor. I originally included the human tourists mostly for scale, not meaning to suggest that they were going to come to a bad end.  Near the end of the first "Jurassic Park," the humans are saved from the Velociraptors by the intervention of the Tyrannosaur, so maybe it is unlikely that the reptiles would be working together to catch dinner.

But it really doesn't look good for the humans, does it?