Bigfoot Poses on the Brooklyn Bridge 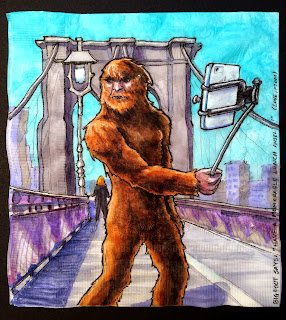 We seemed to be doing a series of cryptids on the bridge... But my son has asked me to stop the Brooklyn Bridge stuff, so sadly, I don't think there will be any Chupacabras or Loch Ness Monsters posed with New York landmarks.

I had thought the Sasquatch might be a safe bet as the last two library books my son brought home were both literally titled "Bigfoot." But after my son looked at this particular image, he told me solemnly that napkins like this were making him look weird in class. I think maybe we will focus on some video game characters or main stream superheroes in the near future.
Posted by ninalevy at 4:23 PM