Why Draw on Napkins?

I’m not sure that it is possible for me to provide a satisfactory answer to this question, but I can try to describe how I ended up drawing on so many napkins.

When I packed a lunch for our son’s first afternoon at nursery school ten years ago, I included a quick note and a sketch drawn in black permanent marker on a napkin. I was hoping to provide a little reassurance from home and to gain him a bit of extra attention from the teachers who were supervising lunch. I do not remember what was on that first napkin.

This beginning of the napkin thing seems quite reasonable. Thousands of parents who live in countries where children can go to daycare with a packed lunch containing a paper napkin no doubt do the same thing.

But in our case, the situation escalated steadily from there. 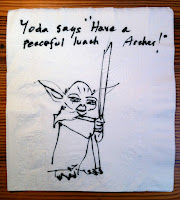 While my drawing skills were never great. I did attend art school, and sculpting is my day job, so I was therefore perhaps slightly more capable than the average parent of producing convincing renditions of Disney, Dr. Seuss or Sesame Street characters. Like all indulgences of one's children, after the napkin drawing had been in the lunchbox one time, it could not go missing without prompting violent protest. 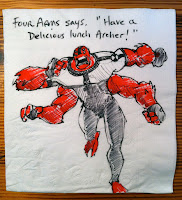 As I continued drawing for my first son, I discovered that I was nurturing a small art director and media critic. His requests became more complicated and problematic. I was pushing my own agenda, trying to demonstrate to his teachers what sort of edifying books we were reading at home. He, however, had no interest in anything that was not on the bleeding edge of cool for three and four year old boys. 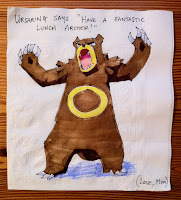 Pretty quickly, the napkins were mostly demonstrating my son’s intense interest in pop culture, and, that maybe he was being allowed to watch too much television. The napkins were going to lunch at a Quaker school, and it became a bit of a running joke that it was hard to come up with images that could scratch the boy culture itch and still be appropriate for a philosophically non-violent lower school lunch. I did my best: Super heroes and villains clutched forks instead of guns; swords, knives and claws skewered strawberries and broccoli florets. 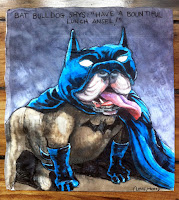 Our younger son soon joined his older brother in campaigning for more complicated, full color napkins. I slowly acquired an impressive collection of Sharpies, and then bought more sophisticated alcohol and xylene based art markers.

I try my best to honor requests, but as I do most of the drawings after the kids go to bed, it is often not possible to orchestrate a complicated scene involving multiple unfamiliar characters. There were a few school years and summer camp sessions when both boys were taking a packed lunch, and I had to make some rules like: no more than two characters per napkin.

When I don’t receive a request, I try to draw something that interests them, ideally something that they have been looking at, playing with, or reading about the day before. At bedtime, we often talk about what would make a good napkin image- some oddly appropriate or ironic combination of characters perhaps. The kids definitely see the napkins as a collaborative project.

In recent years, the napkins almost always come back home in reasonably good shape. Early on, they were actually used for their intended purpose, and returned spotted with berry yogurt and mustard, if at all. At this point, however, neither child uses them for anything besides decoration. Several years ago my older son told me helpfully, “"Oh, I only use the napkin to get attention. I just wipe my hands on my clothes."

We have boxes of hundreds and hundreds of returned napkins at home. The boys enjoyed looking through them, revisiting their previous obsessions day by day, and leaving piles of napkins spread all over the apartment. I started the napkin blog mostly because I was tired of picking up the used napkins and putting them back in the boxes. 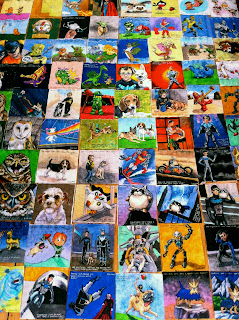 The blog additionally allows the kids to look back at all of the Batman, or the “Star Wars characters riding dinosaurs,” themed napkins at one time with much less clean up. Now that they are older, they also like to read my commentary on the images and argue with me about it.
Making the drawings nightly has encouraged me to stay in touch with whatever my sons are obsessing about on a given day. Knowing a little more about, for instance, the annoying phrase that they are shouting repeatedly over the course of a week helps to make it a bit easier to tolerate. I may find a video game that they adore mostly irritating, but if I have to discover something inside it that would be interesting to draw, I do learn to appreciate it a little more.
I don't see the napkins as only a maternal indulgence, although they are that, no doubt. I do get more out of drawing them than just the positive effect on my relationship with my sons. I view the napkins as a sort of compulsory nightly drawing practice, an enforced pop culture update, and (in my most pretentious moments) a particularly long running sort of performance art. None of the napkins are notable works of visual art by themselves. But, well, there certainly are a lot of them, and the group comprises both a narrative of a particular cultural time and a personal relationship. 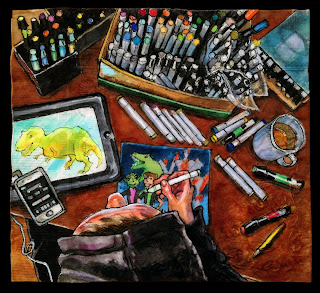 My drawing skills definitely improved some over the course of a couple thousand napkins. Looking back at the last ten years, however, I do wish that I had acquired the same amount of expertise in a more traditional (or archival) medium. Napkins are a notoriously difficult surface to draw on of course. While I am using expensive, fancy napkins, they are still overly absorbent and easily shredded.

Yet, sadly, I now find that I just don't draw as well on other surfaces.