A large undifferentiated list of all of the family related napkins can be seen at this link: Family
It includes the below images and 72 more of varying quality.

But to pick out a few images:
(You can click on the images to see them larger, and on the titles to see the original posts) 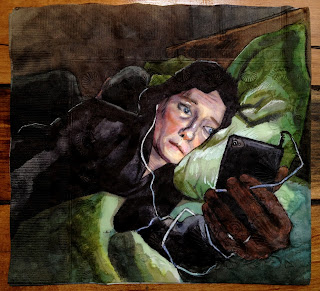 1:30 am:
2/25/2013
From the 24 hour series about our daily routine. This one is about me trying to go to sleep after finishing up drawing on the napkins late at night. I am listening to old podcasts, attempting to screen out the various noises produced by other family members. 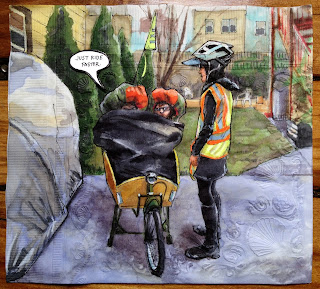 7:40 am:
4/5/2013
From the 24 hour series about our daily routine. Here we are loaded up on a winter morning and leaving late for school in the bike that I used to ride the kids there pretty much every day for five years. The trip around the Brooklyn Navy Yard was pretty cold, so they are cocooned in sleeping bags and an insulated blanket. People often mistook them for bags of laundry.
The speech bubble is a cardboard add-on. 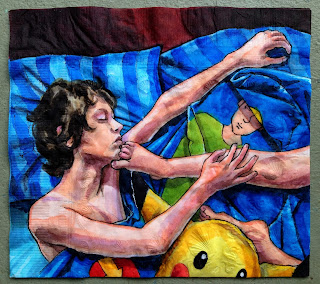 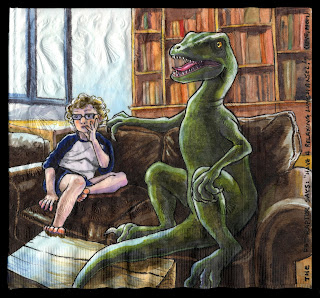 Relaxing at Home with a Pet Raptor
6/13/2016
A portrait of our younger son with a Velociraptor on our couch because movies suggest that dinosaurs would make good pets.  There have been many napkins with drawings of the kids with or dressed as their favorite animals or characters (fantasy napkin portraits) 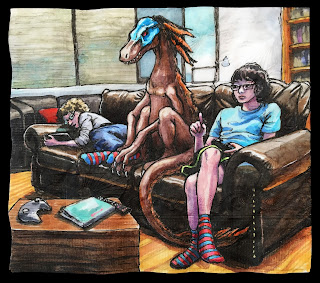 Dinovember Foot Rub
12/14/2016
Another view of the couch, but in this case, I have replaced myself with a trendy dinosaur. 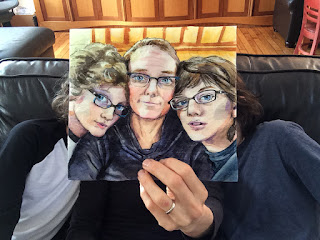 Mothers Day 2016
5/8/2016
An attempt at a card image for my mom on Mothers Day.  Both kids were viral and infectious, so we were not able to be with her.
This is one of a series of Napkins portraits in the real world" in which have I substituted napkin portraits for faces. 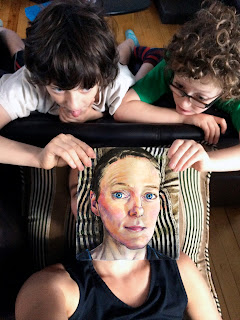 Selfie with Uncooperative Kids:
8/15/2014
Another napkin portrait in the real world with a unrealistically flattering drawing of myself. 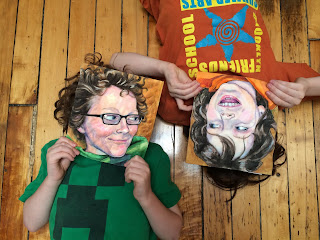