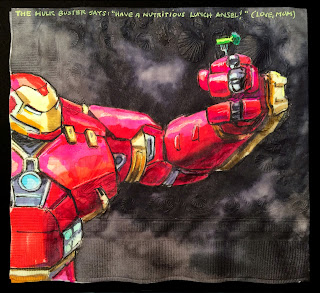 Don't Be Afraid of Green Things:
(But, I should have drawn the broccoli smaller.)

Iron Man's Hulkbuster suit might have been the most compelling thing in the recent Avengers movie as far as my sons were concerned.

Endless debates of "Who would win the fight if..." are always good, and the Hulk vs. Iron Man scene in Ultron provides fodder for such a discussion.  The Hulk was presented as the most unstoppable of the Avengers in the first movie.  But in the second movie, it seems that when wearing more armor on top of armor, Iron Man might be able to tap the green guy out.

I like the idea of layered suits of armor, like an endless series of Russian stacking dolls.

But no amount of armor excuses you from eating your green vegetables.
Posted by ninalevy at 11:02 AM