The Clumsy Ninja Takes on Ultron 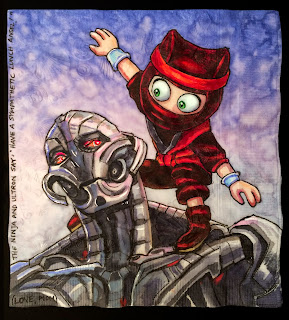 What level does the Clumsy Ninja need to achieve in order to take on Ultron?


Of course we had to see the new Avengers movie "The Age of Ultron" when it opened last weekend. I observed the usual family movie viewing phenomenon where the kids' attention tended to wander during any scene with dialogue, and conversely, I found it hard to pay attention during the battle sequences.

"Ultron" has some nice light interpersonal moments like the scene when all the super-powered boys tease each other about who can pick up Thor's hammer. But the movie is mostly devoted to complex digital orchestrations of objects and bodies flying through space and crashing into one another and the surrounding architecture....And why would you be there to see an Avengers movie anyway if not for that?

It is remarkable what can be done with millions of dollars of CGI...But it all looks like a video game to me. To which my sons would say, "So what?"  Or, more likely, "Yes!!"

While we are on the topic on digital animation in video games: the kids are still enthusiastically working on "Clumsy Ninja." The game features some subtle and realistic interaction with the ninja character which is not just about running around whacking things. Despite their diligence, however, the kids have only managed to advance their ninjas to level 21 out of 99.

They're definitely going to have to make a lot of progress before the ninjas are ready for Ultron.
Posted by ninalevy at 12:55 PM