A Thing To Go On A Plinth:

The question of how to make a public sculpture that is clearly about (or perhaps, even a celebration of) portraiture yet is not a specific portrait, is perhaps not easily resolved.

Discussion of portraiture so often devolves into a debate over which individual deserves to be memorialized, or whether equal representation has been, or ever can be, achieved.

Following are some attempts at addressing this question:
(click on the images to see them enlarged)

(See the final
Images of this proposal)

Anonymous Multiplicity
(1000, or perhaps even more?) 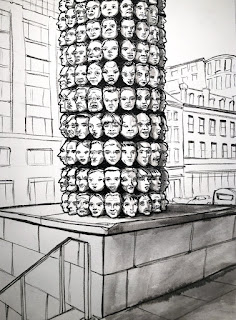 Background:I spend a lot of time on public transit with my younger son. During what is not necessarily a felicitous daily experience, I am always diverted by the fantastic opportunity to see an amazing, diverse assortment of faces. Traveling from Brooklyn to the upper east side at 7:15 am via New York City subway displays a survey of people from every part of the globe and a beautiful variety of facial anatomy and styles of self presentation.

The sculpture proposal:The hope here is to create a large scale (even “monumental”) object out of a collection of portraits of individuals who are each distinctive, specific and recognizable- at least to themselves, their family and friends.

These portraits would want to be somewhere in the neighborhood of life size or slightly larger (generally I find that figurative sculpture needs to be 10-25% larger than life size to read as life size, particularly from a distance)

Together they would create an object that would echo the Doric columns on the Greek revival facade of the museum.
They would be cast in a resin and fiberglass reinforced composite (probably with a structural steel core) and could probably be assembled on site from stacked components. Perhaps the material would best be a consistent non-biological color- a blue grey for instance- not to be confused with any skin tone or another.

The column would acknowledge the remarkable diversity of the United States, and I would really enjoy having an opportunity to sculpt a wide variety of heads. 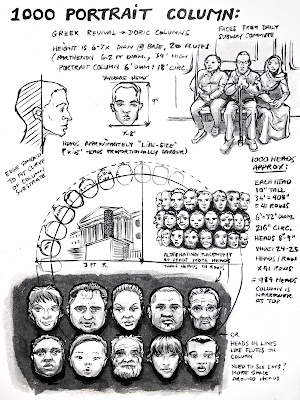 Our subway commute, and a composite of people with diverse faces dozing on the train: 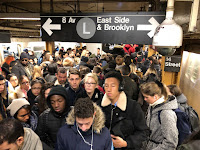 a detail of a previous piece from long ago that featured 500 individual heads
in this case, they were quite small and were all smiling, or grimacing.

Portraits that are not of people,
(sculptures of famous, supposedly apolitical non-humans that everyone can like)

Background:
The presidential pet has been a consistent theme throughout the history of the United States. They function as publicity tools to humanize and generate positive attention for their owners, as well as genuine companions. With very few exceptions, every president has had at least one, and in some cases, amazingly vast collections, that have been well known and exhaustively covered in the press.

In these sketches include a few examples. For instance:

Jonathan Edwards was a black bear that Teddy Roosevelt supposedly treated like a pet dog, including some good natured wrestling.
The Roosevelt family pets were many in number and included a hyena, a green snake named Emily Spinach and a one legged rooster.
Pauline Wayne, kept by Taft, was the last official Whitehouse cow, and inspired a media obsession.
Supposedly Herbert Hoover was gifted with 2 alligators which he kept in an unfinished east wing bathtub.
Andrew Jackson’s parrot Polly had to be removed from his funeral because she was swearing too loudly.
Benjamin Harrison’s two pet opossums were named Mr. Reciprocity and Mr. Protection

The sculpture proposal:
The pet pile or pet head totem pole would be cast in fiberglass reinforced resin and possibly painted. The Pet Totem features much larger heads that are more comic and not realistically proportioned in relation to one another. 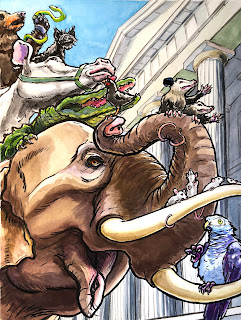 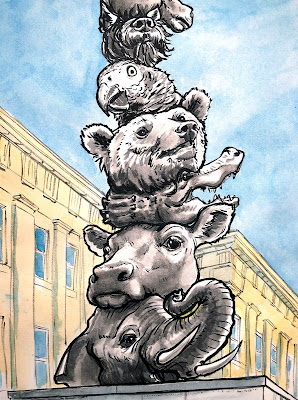 and a couple related water colors from the napkin blog:
click on the images to see the original posts:

Isolated Features, perhaps based on recognizable persons, perhaps not, that might add up to a portrait or several

Background:
During the 90’s I made a large series of sculptures in which I treated body parts and features (ears, noses, fingers, feet) as isolated and aestheticized objects that did not look like they had been removed from a person, but were intended to be complete unto themselves.

The sculpture proposal:
Very large features cast in fiberglass mounted on steel lamppost-like structures could assemble into legible faces from certain viewpoints while remaining distinct pieces from other perspectives.
Several potential faces,
each perhaps only visible from a certain location: 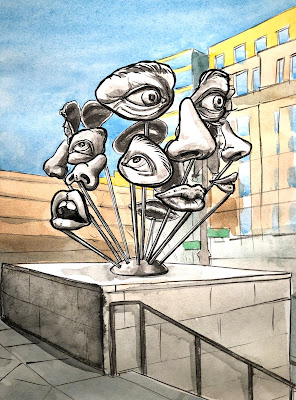 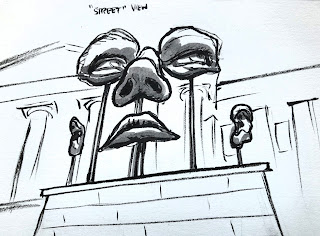 Solution 4:  Outside In Head

Inside out/ outside in portrait head of a non famous person with a really interesting face.

Background:
Many years ago when I lived in Chicago, I was fascinated by the 4 times life-size portraits of “the captains of industry” that were displayed on tall pillars in front of the Merchandise Mart in downtown. These collosal heads were commissioned by Joseph Kennedy in 1953 and unsurprisingly portray wealthy and distinguished older white men including Frank Woolworth, Marshall Field and Aaron Montgomery Ward.

In 1993, I made a similarly scaled portrait of my neighbor Otto. His craggy face and serious demeanor made him look like he might be a captain of industry. But he was in fact very much the opposite sort of person, largely indigent and squatting with several other men in the unfinished basement of the building I worked in.

While making an alternative version of the Merchandise Mart Heads, I turned the portrait inside out, casting a negative so that the inside became the cast surface, and the details of the face were visible in the negative.

I have included a couple of images of casts of that head and a similar piece with a copper leafed surface to illustrate how this sort of cast looks. I originally displayed these heads so that the viewer could look down into them rather than looking up at them.

While I was visiting the National Portrait Gallery plinth last November, there were a couple of older, apparently indigent women sitting on the benches behind the plinth area.

It seemed like such an “anonymous” person with a distinctive face who hangs out in the area might, like Otto, provide compelling source material for an interesting large scale head. 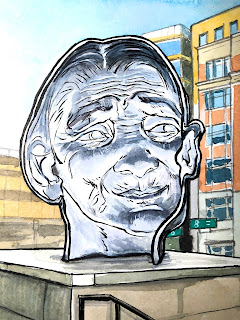 another drawing of this sort of head: 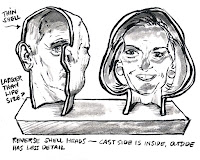 a previous negative cast head with a copper leaf surface: 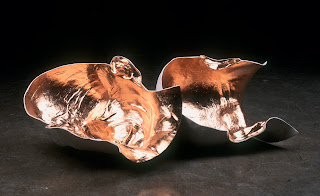 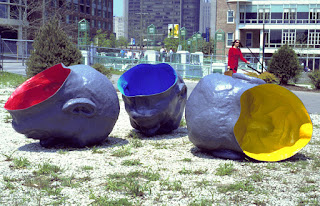 The actual heads at the Merchandise Mart Hall of
Fame on the Chicago River:

How Not to Make a Public Sculpture:

And finally a lot of silly solutions that play with the idea of large scale traditional portrait busts of famous men... like presidents.
(though I did receive some positive feedback from my graduate students about "Washington's head with multicultural legs) 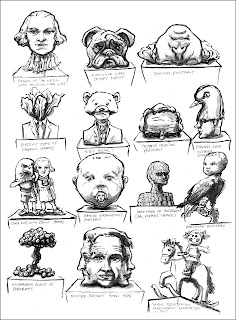