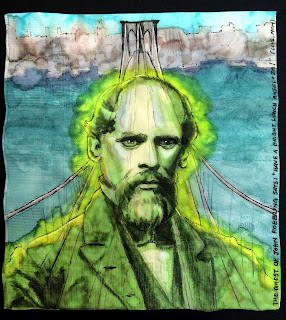 Our son did not get the role he wanted in his second grade play. he was hoping for the "Ferry Boat Driver."  His older brother had that part four years ago, and played it as "Sarcastic Scenery Chewing Ferry Boat Driver (who has had too much coffee and is waving the cup around in a troubling manner)" The younger brother was eager to reprise the comic role, but it did not make it into his class's version of the story.

Instead he has been cast as several characters: "Narrator of Scene 10," "Albert," "Michael," "Trustee #3,"  and, most importantly, "The Ghost of John Roebling." It looks like he might have the opportunity to follow in his older brother's footsteps and provide some comic relief after all.

Unfortunately, my drawing of Mr. Roebling's ghost is not at all humorous. I did put some effort  into getting a reasonable resemblance to his photo...and to making sure that he was a glowing ectoplasmic green.
Posted by ninalevy at 6:46 PM