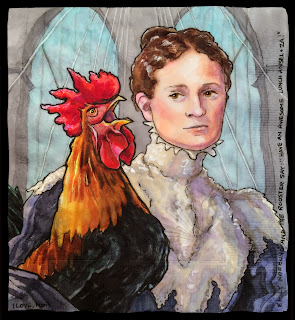 Our second grade son's class is finishing its study of the Brooklyn Bridge by writing and performing a 45 minute play about the drama surrounding the bridge's construction.

Slipped inside the story of the struggle to get the bridge completed is a feminist message. The bridge was originally designed and overseen by John Roebling. Early in the project, however, he succumbed to a foot crushing injury (compounded by the misguided belief that dipping it in water repeatedly would heal the wound). The bridge construction was then overseen by his son Washington.  When Washington became bedridden from caisson disease ("the bends") his wife Emily was grudgingly accepted as his representative and eventually as the de facto chief engineer. This was a rather remarkable feat for the time when it was commonly believed that women's minds were biologically incapable of comprehending complicated science and math.

On opening day, she was the first person to ride across the bridge. According to the second grade play script, she did this "with a rooster in her lap. It is a sign of victory." One source I stumbled upon in my 3 minutes of Googling said that the bird crowed constantly and did not appreciate the role it had to play in the spectacle.

It seemed to me ironic and sadly appropriate that Emily would carry a symbol of distracting chicken-brained male virility during her moment of triumph.

Alas, my portrait of Emily is not particularly accurate, but I did enjoy drawing the bird.
Posted by ninalevy at 12:42 PM